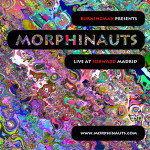 The first official Morphinauts djset happened in January 2013 – a live performance at Forward, a monthly event in Madrid dedicated to electronic underground sound and visual experiments. More info at the Forward’s event page on Facebook.

At first I wanted to keep it more on the ambient side but, since the crowd was in the mood for a beat, I aimed towards creating a trippy, spaced out dancefloor since the kick-off of the DJset, on a crescendo escalation into a rave dimension. That’s how I like it! I enjoyed playing it a lot, and the Forward crowd enjoyed dancing to it! Now it’s time for you to enjoy it!

Please note that as I use always several channels on at the same time, sometimes there are no boundaries among tracks, and often 2, 3 and even 4 tracks merge into one single output (plus all the loops coming from other dj gear) – so, also consider the timestamp on the Mixcloud file as approximative. Nevertheless, let’s say that the general order I had in mind when loading tracks on the decks goes in the following order:

The DJset wouldn’t have been the same without the precious, sometime decisive, sometimes even subliminal incusion of several sound loops and sound textures / soundscapes. Besides of my own banks of sounds loops that go from strong industrial beats to nature sounds, even if just for a single beat, sound or longer selection, I also loaded on my Traktor decks the following tracks:

Do you like the Forward Madrid DJset? Download the mp3 version, enjoy it and feel free to share it with your friends, just please check out my copyright and creative commons info. Welcome to the Morphinauts sound.