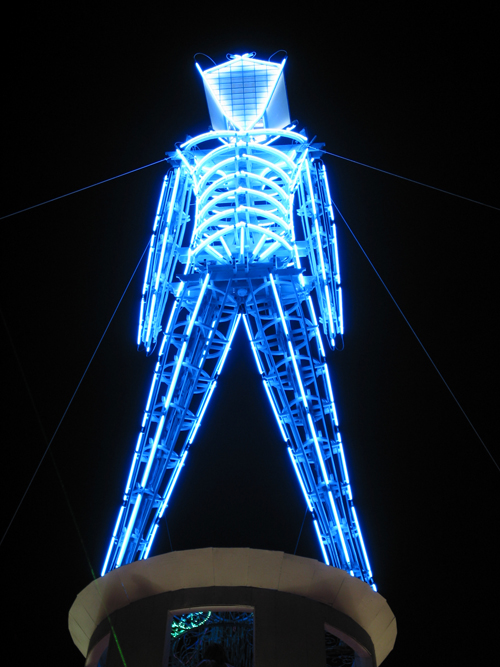 Burning Man is a festival in the desert of Nevada, United States. No, wait… it’s not a festival, it’s a project. Actually, it’s an experiment in temporary community. Temporary? Wasn’t it going on all year round?

There is a quite standard definition that can be found on pretty much all Burning Man sites, books, documentaries… let’s use that one. Each year 25,000 30,000 35,000 43,000 50,000 60,000 of people (yes, the number of participants has been growing exponentially over the last 10 years) gather in the Nevada desert to create an event called Burning Man, considered to be “the most significant counter-culture gathering of our time.”

Some other define the Burning Man community as “a Mad Max-style community encouraging radical self-expression and self-reliance, where participants freely express themselves in every conceivable way including art projects, gifts, performances, themed camps, informational workshops, and music that attracts top DJs from around the world.” The same site also define the gathering as “an annual pilgrimage to the Nevada desert to create the vibrant society of Black Rock City built on 10 principles: gifting, de-commodification, radical self-reliance, radical self-expression, communal effort, civic responsibility, leaving no trace, participation, radical inclusion, and immediacy. Art cars can be magic carpets, fire breathing dragons or polar bears riding across the desert! Very surreal.”

Yes, Black Rock City can be a very surreal experience. I wrote an article on Burning Man back in 2006 for a blog that unfortunately is not live anymore, and I described it as “something in between a non commercial Las Vegas that meets a Disneyland for adults, that meets the cinematographic set of Mad Max III where also Fellini is shooting the most visionary movie of his entire production, that meets the backstage playground of Cirque du Soleil where everybody pretend to play Priscilla Queen of the Desert.” And yes, Burning Man is also one of the largest art festivals in the world, completely built and created by its participants, where the incredibly stunning showcase of creativity will never loose sight of “radically-important” topics such as environment, spirituality, ethics, sharing, collaboration, education, innovation, and community.

Burning Man’s principles impacted at least three generations of “burners”, who adopted and imported them in their daily life, in the way they deal with people, run their businesses and, most of all, in the way they experience the community all year round. Not for nothing another classic expression related to Burning Man is “Burning Man changed my life”. As a matter of fact, the event is considered being the grandfather and originator of all “transformational festivals”. And yet, it’s not “just” a festival.

And with this we go back to base one. Please rewind. Welcome Home.