This year French Burners will bring for the first time a bit of French flair to the playa as part of the Circle of Regional Effigies (C.O.R.E.). The French CORE project for 2013 is called Stairway to Heaven.

As we describe in this post, Stairway to Heaven is a road to the unknown, a vertical adventure with the purpose of enjoying the journey itself. It is an intentional, exploratory experience, where each step brings the participant new vistas and new encounters. Much like the elaborate structures built by cargo cults, it is our attempt to reach upwards to find a new level of knowledge and understanding of each other and ourselves. Each turn of the spiral staircase presents a possibility for new adventures, and with the end of the journey hidden around a corner. The journey, like life, is unpredictable and not a direct path from point A to point B. Each step forward also brings the traveler closer to the center, to the heart of the structure and perhaps even the core within themselves.

Besides of representing one’s journey through life, the spiral structure is also reminiscent of the escargot, or snail, a food very much associated with French cuisine. To complement the imagery of escargot, an empty cask of wine is found at the top of the structure. Wine is a vital part of French culture and society, and we will from time to time be present at the top of the structure to offer a taste of French wine to the adult participants who reach the summit.

The sides of the structure will be decorated with drawings, poems and other messages submitted by members of the French Burning Man community, and we will invite all the participants of Black Rock city to continue decorating the structure throughout the event. The structure will be equipped with a small sound system playing French music, both classic and modern, to further bring a taste of France to the playa.

During the day, participants that approach the Stairway to Heaven structure will see images drawn on the exterior of the structure in the style of prehistoric cave paintings, telling the stories of experiences that the artists seek at Burning Man. It is an allegory for the hopes of primitive cultures that celebrate the cargo cult. Once at the foot of the structure, participants can interact with the structure by adding their own images or stories, and find themselves at the foot of a spiral staircase. The steps rise above the playa surface around a central column, and participants are invited to climb to the summit. More details about Stairway to Heaven by day are published in this post. 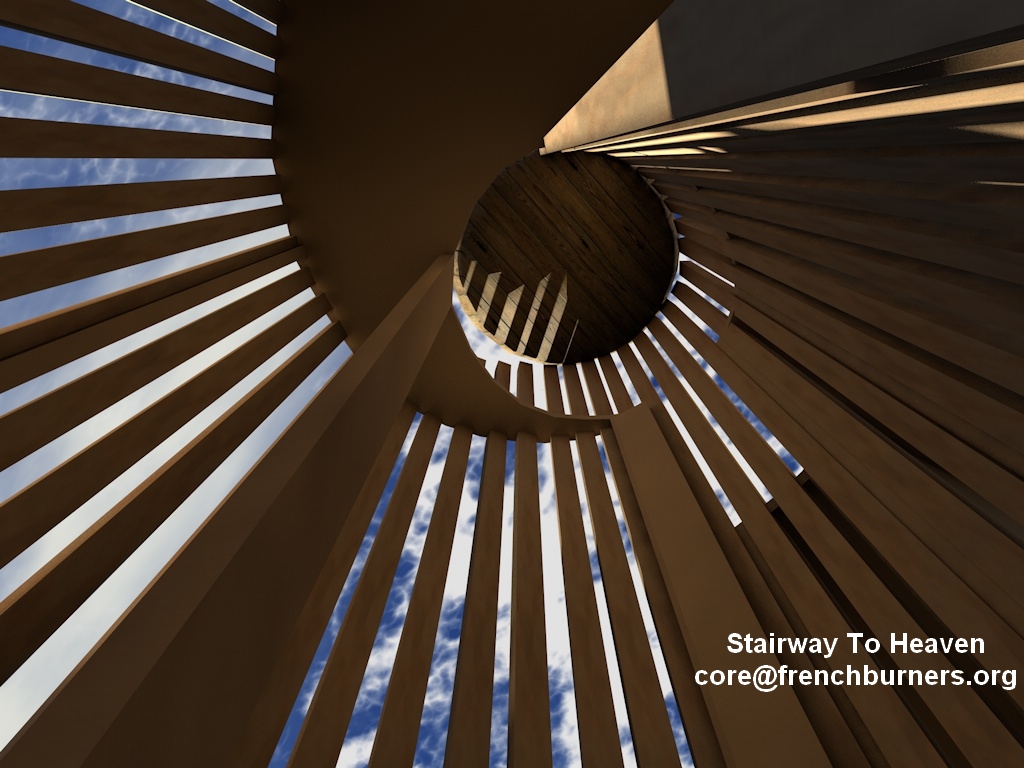