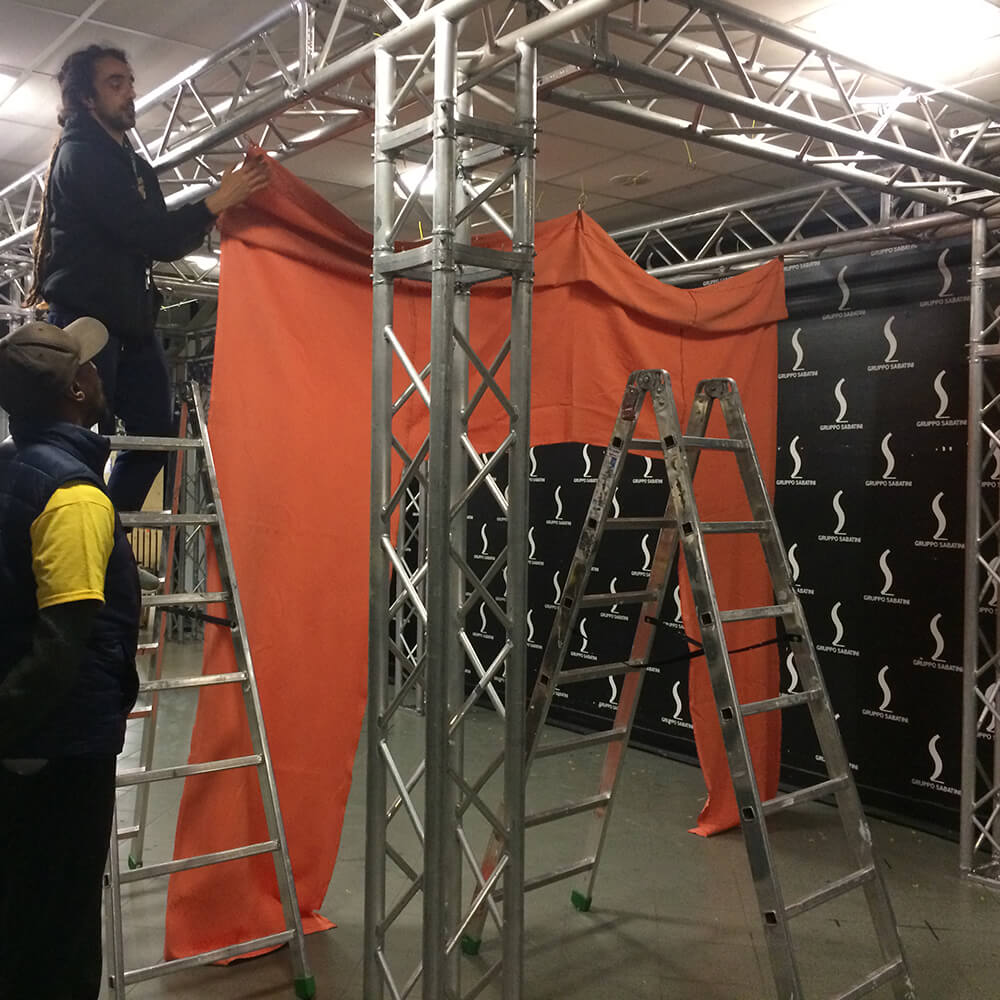 Setting up the installation at Indica Sativa Trade 2019

Setting up the 50 Shades of Green installation for its second exhibition at Indica Sativa Trade 2019 it’s not been easy at all. I have been working for 48 hours steady, four times the effort needed to set up the installation at its first showcase in Rome, at Canapa Mundi 2019. To start, I couldn’t count on the help of the many roman friends who showed up to volunteer to set up the installation in Rome. On the other hand, I had more workers allocated by the Bologna organizers to help me set up the artwork. But there were many obstacles indeed…

First: the holding structure. While it was agreed with the organization of the Bologna trade show that I could have counted on having an “americana” structure (the one used also on musical stages, visible in the pictures below), “the plan” changed upon my arrival, and we basically waited in vain one entire day for a blacksmith, who was supposed to set up a different (and more complex) holding structure.

Not only the blacksmith didn’t show up, but at the end of my first day in Bologna an engineer of the Unipol Arena, in charge for all safety structures, decided that we had to use the “americana” instead – so the organizers had to last minute locate and rent one, that has been installed in the hosting space only on the next day, after more than 24 hours from my arrival at Indica Sativa Trade. Good thing we got it at the end… 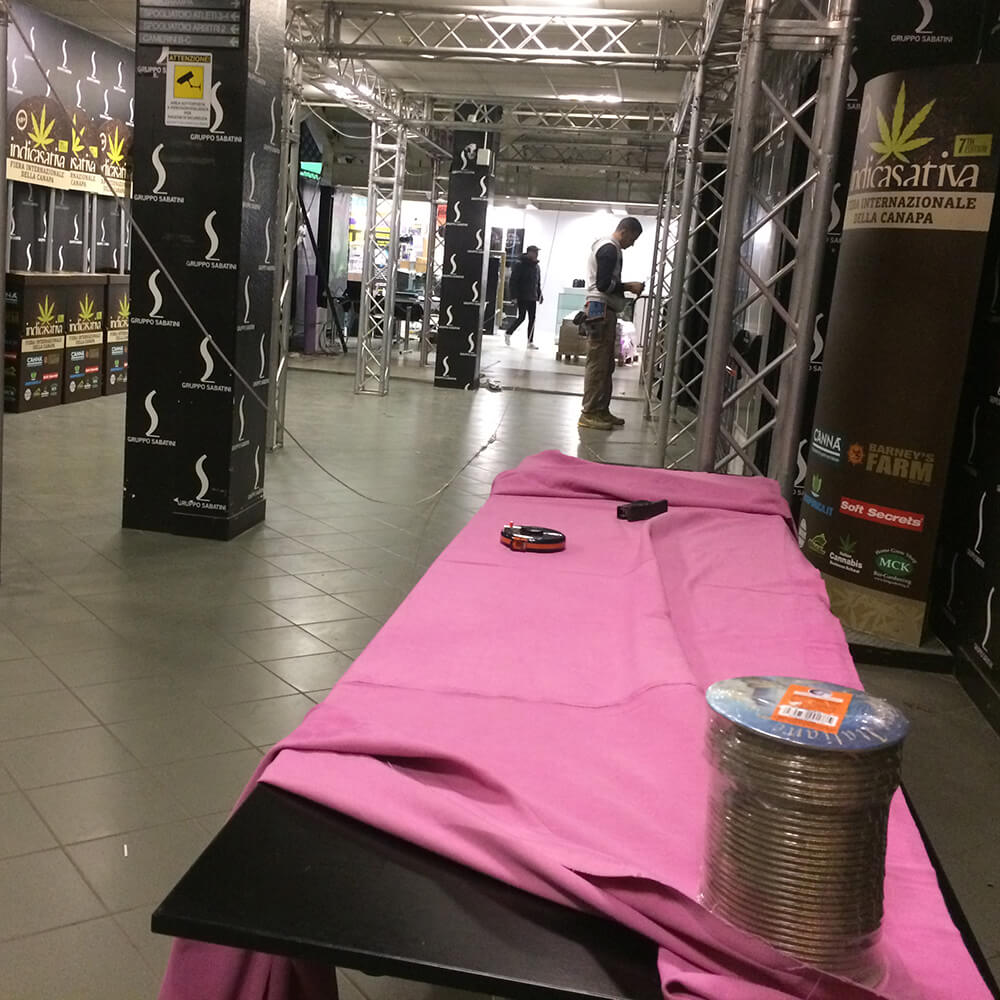 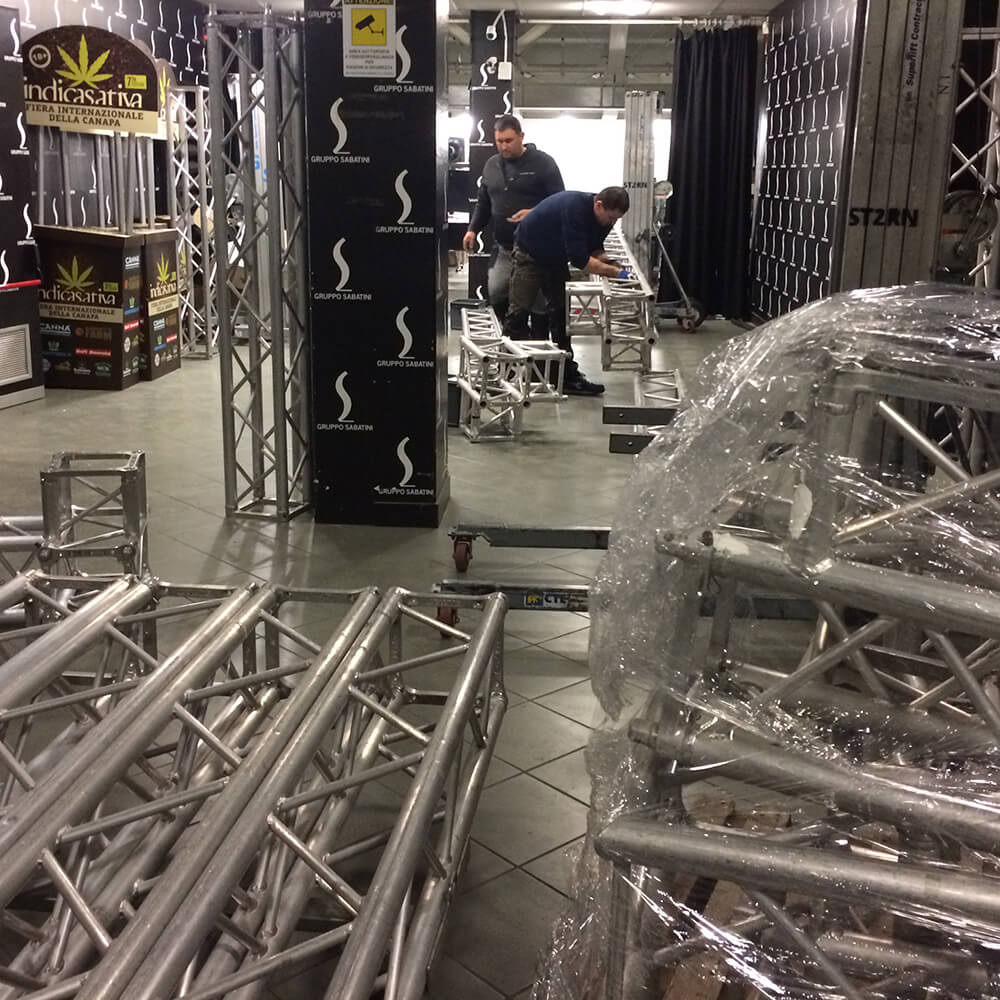 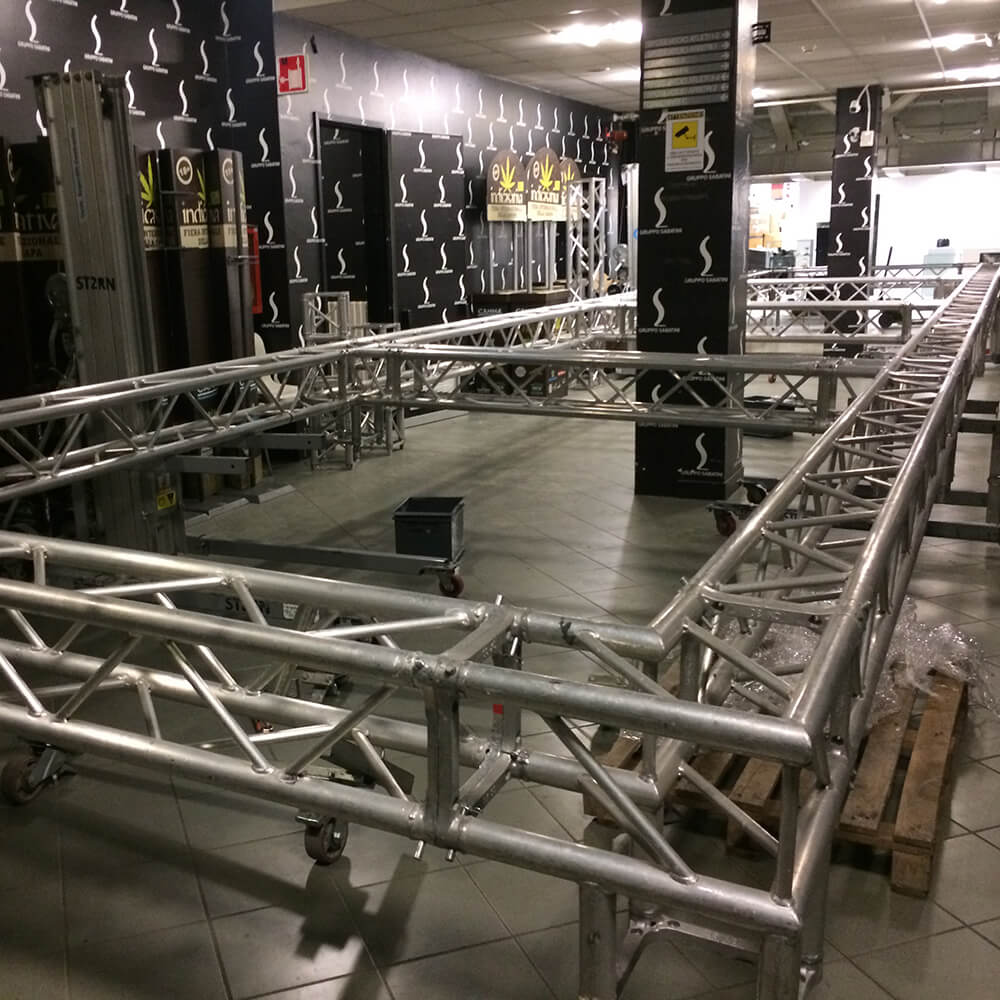 Major issue: the length of the space. 50 Shades of Green has been designed to be 25 meters long, but I still didn’t had “the pleasure” to see it in all its glory. At Canapa Mundi in Rome I was given a 20 mts long space, and the final length of the roman installation was just around 17 mts. In Bologna, I was told I would have had a 19 mts space, so I was prepared to install the artwork again at a 17 meters scale, but… in reality the space I had allocated for the installation was just 17 meters long, and the “americana” we found at the last minute was just 15 mts long, so the final length of the installation was even shorter than the one I got in Rome.

The true big problem: the height of the space. The 50 shades of the installation are 3.50 mts tall, and are not supposed to touch the ground – so the installation really needs to be installed in a space where the ceiling is at least 4 mts from the ground. The space I have been given in Bologna was just 3.15 mts tall, so I had to spend an entire day reducing the size of the 50 shades. I started sewing them by hand but, as I realized that it would have taken forever, I moved to a faster approach, using a staple gun and ending up with the less invasive approach of safety pins. The entire resizing work lasted more than 24 hours, and delayed all the installation process to the point that I was still setting up the artwork when the trade show opened to the public, and finally had everything set up only three hours later.

The width of the space, with damn columns in the way, was another issue. The allocated space wasn’t wide enough, and had two black columns right in the middle. The only way to try to disguise the columns was to place the installation on one side of the space, stick to a wall. The columns where still there, among the shades and still visible inside the tunnel, but at least they where not straight in the middle. Unfortunately, there was not enough room to “walk around” the installation, as it was possible in Rome, and as 50 Shades of Green was designed to be. 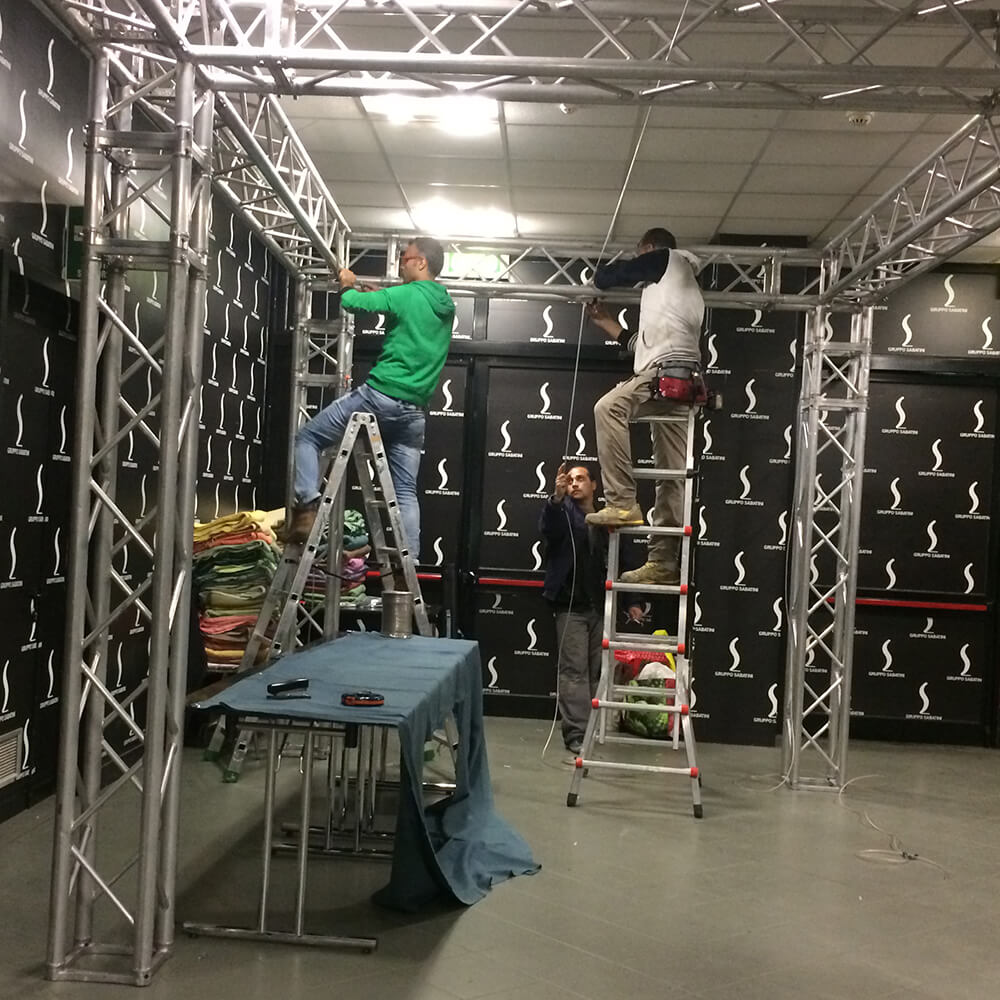 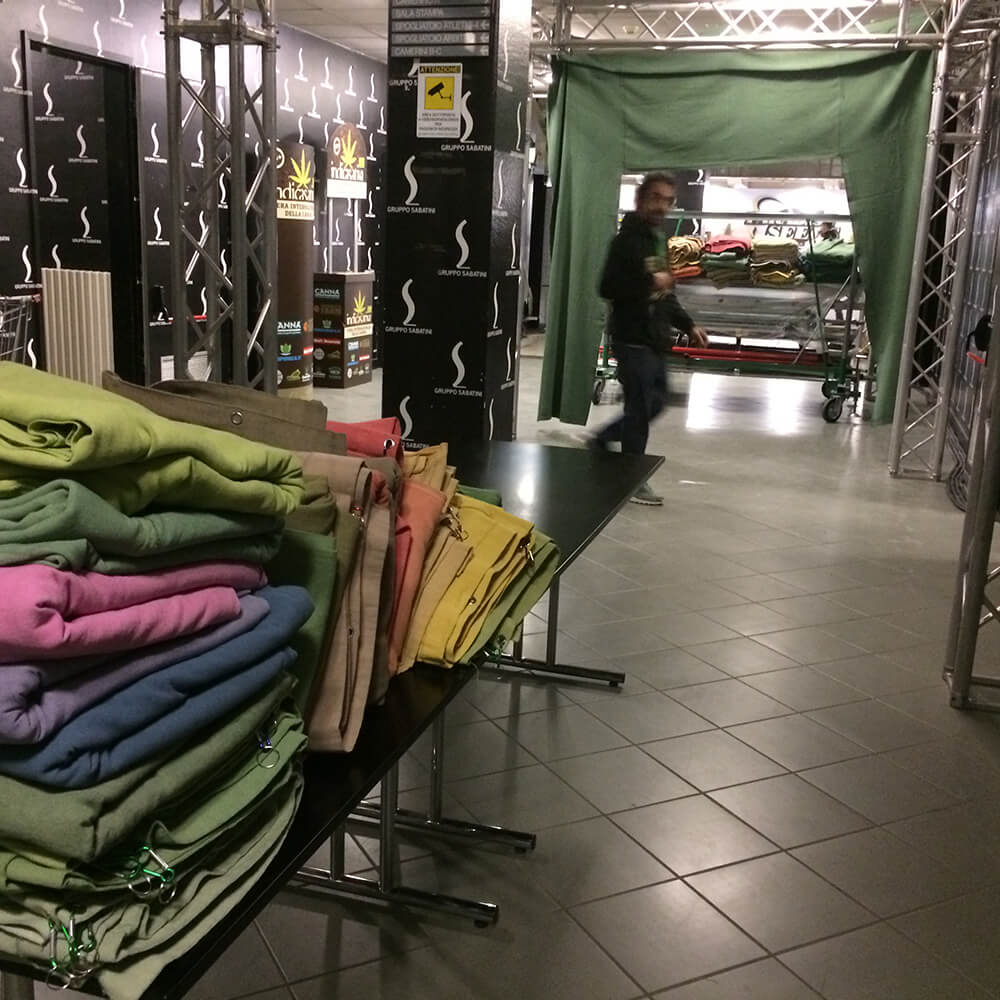 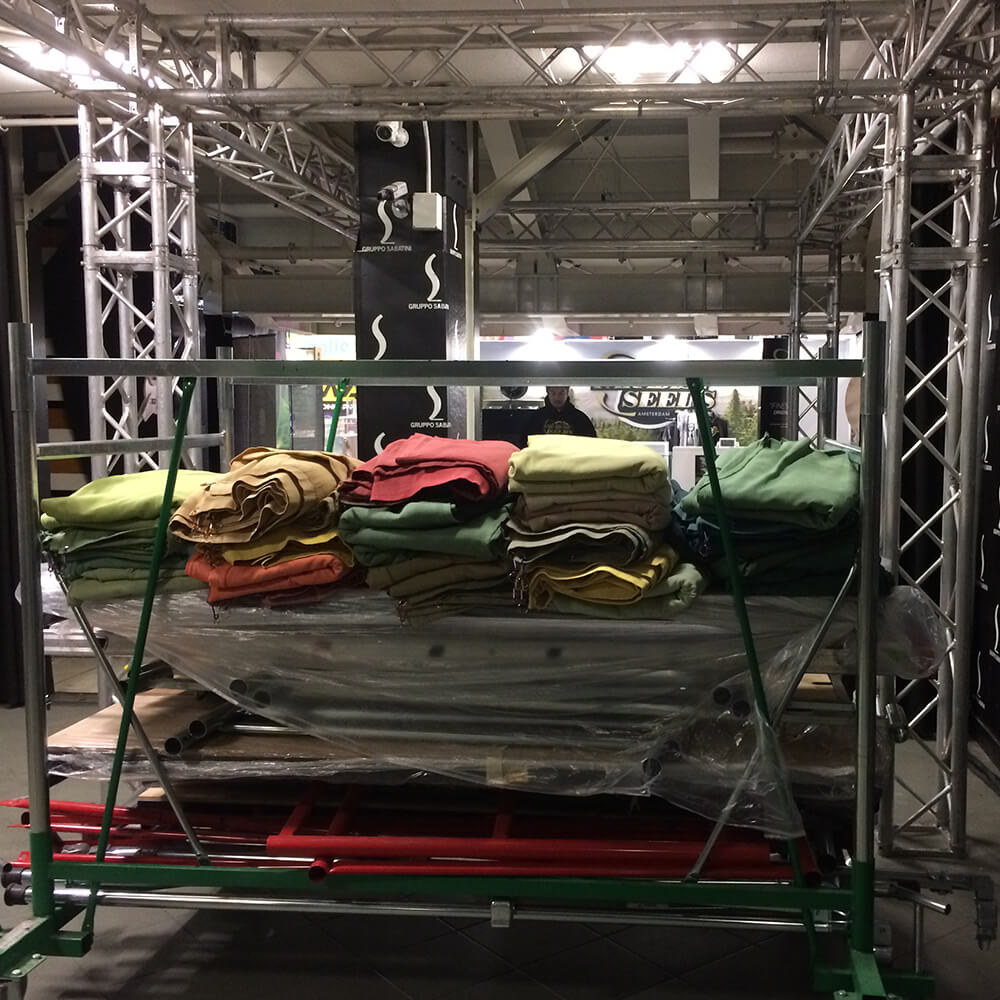 Final problem: the lights. As for the installation at Canapa Mundi, also at Indica Sativa trade I couldn’t count on a decent lighting system for the installation, and the result was having a dark tunnel, with just a few spots of light among the way, where it was not possible to fully appreciate the colors of the 50 shades, visible only on one side, with the sequence of colors being also interrupted by the black columns.

But anyway… face to the many installation problems, I am happy nevertheless with the results in terms of experience. And I have to say thank you to the Indica Sativa Trade organizers, we despite of the bad location for the installation really tried to help out sorting out solutions and fixing problems. Not without a bit of drama, but they help anyway. Thank you Sandro and Iuri, and Attilio and Andrea on the operations side.

At the end, the Bologna exhibition went pretty well. People loved the installation, and the cannabis terpenes did their job, “entertaining the noses” of all the visitors. I had a few visitors telling me that 50 Shades of Green was the best thing they saw in the entire trade show, and I loved to see the excitement and surprise of those who ventured in the tunnel. I have also met a few other artists, some journalists, and also had the pleasure to hang out with the crew from Cali Terpenes, the project’s technical sponsor who helped me create the olfactory cannabis experience – I will definitely dedicate a blog post to it, and a few other articles to share photo galleries of both the installation and of the happy people who enjoyed it in Bologna. Follow this blog for more updates coming soon! 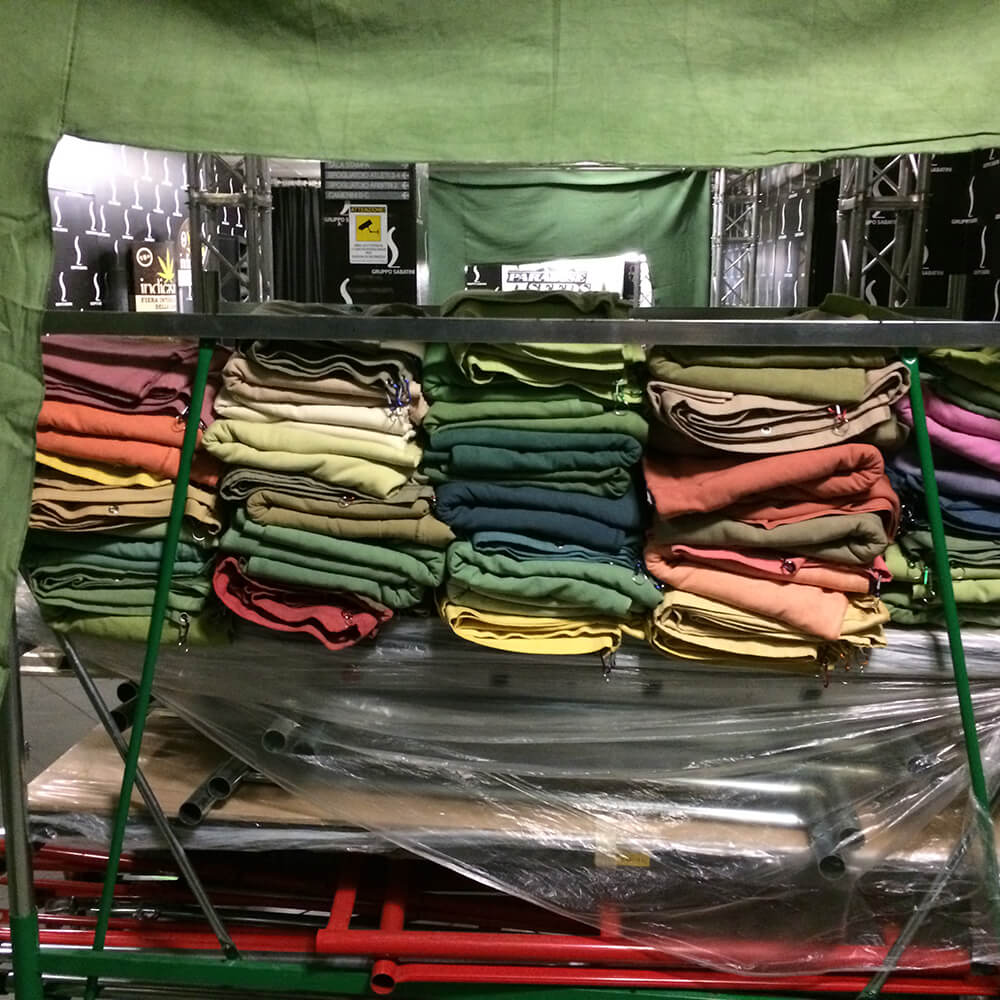 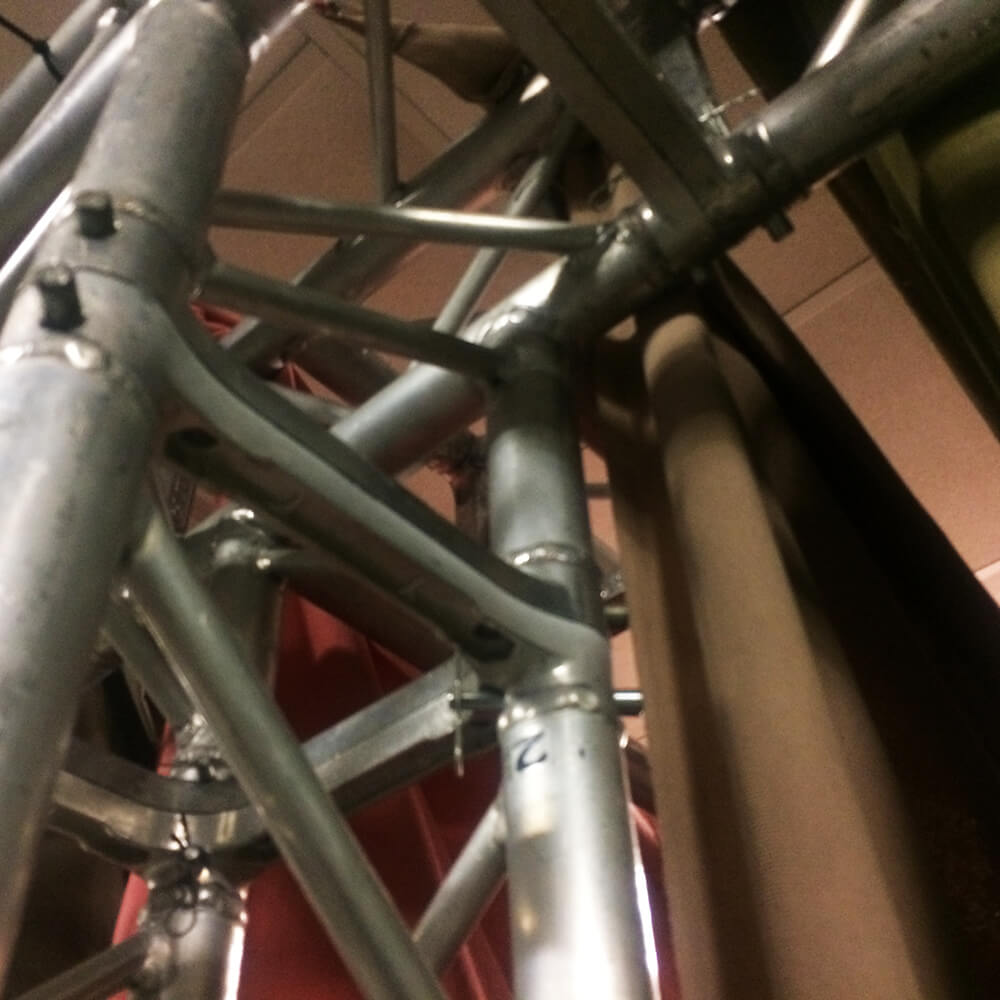