We haven’t been blogging in English for a while, too busy over the last year or so speaking and blogging in Spanish while rolling out the largest and more effective local Nowhere outreach program ever developed in the Monegros, a way to involve and give back to the Monegros land and people who has been hosting our Nowhere gathering for the last 14 years, embracing and welcoming our community more and more.

Over the last year we have run a full series of No Viernes meet-ups in Sariñena, where we regularly discussed and explored the principles, spirit and experience of Burning Man, Nowhere and all the other burners gathering across Europe, with plenty of space for Q&A on how to get involved, how to bring a project or a barrio, and more “dusty topics”, also with the help of regular talks by Nowhere veteran and leads – kind of a “regular keynote presentation” for our Monegros meet-ups.

All our initiatives always generated a positive feedback by local media, so we secured a constant presence of Nowhere in the Monegros news. even in wintertime. 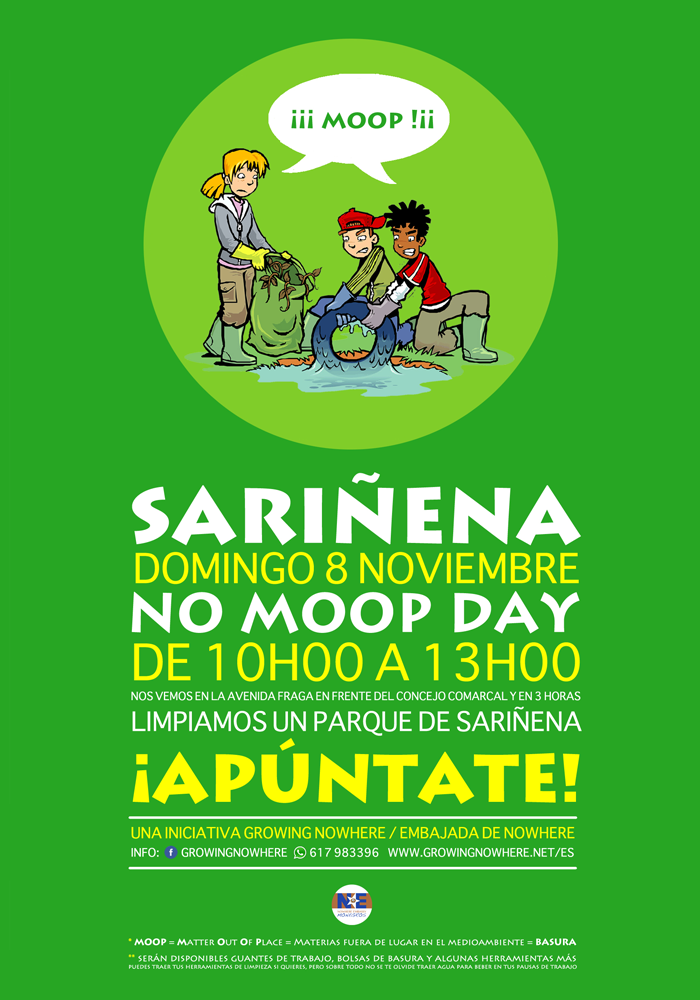 We also launched a few successful initiatives such as the Sariñena NO MOOP Day, where we got local monegrinos (and kids) involved for the clean-up of a nice riverside park in the city, and got ourselves involved with other local Monegros associations, planting trees in the Sierra de Alcubierre with the environmentalist association Arbores para Siempre.

During the last couple of months Growing Nowhere and the Nowhere Embassy have also supported the Nowhere organization by being the Monegros interface and “ambassador” for the organization’s direct interaction with local artists and performers, and for the distribution of the local tickets to Monegros residents.

After the main distribution of local ticket codes, that secured access to the event to more than 40 Monegros residents, we even organized a special No Viernes meetup dedicated to local ticket holders, where we got more into the details of logistic organization, volunteering opportunities, and support to those who plan to bring art projects. 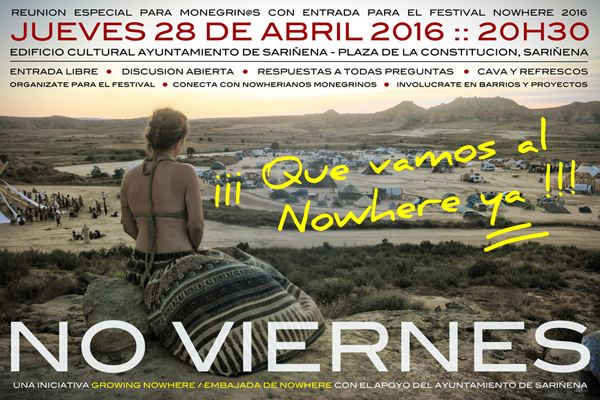 During the winter Growing Nowhere also announced and launched a series of other initiatives that included a public art installation to raise funds for the Syrian refugees emergency, a collective exhibition about the 10 principles scheduled (and then canceled) at the Museo Laguna in Sariñena, a project for public art placement of the Nowhere Temple and other Nowhere art installations in various Monegros locations, plus another (dream) project of creating a small winter gathering called Monegros Temple Burn, where we could have burned the temple eventually placed the summer before as public art.

Even if we announced the initiatives and we had full support and permits by local Monegros authorities, we couldn’t follow up any of those initiatives, for mainly two reasons: lack of resources, and lack of support from the Nowhere organization.

According to “official Nowhere statements” Growing Nowhere is still a sort of “illegal operation against Nowhere” – still not clear why, while the Burning Man headquarters in SF denied the possibility of considering our local Monegros group as an official “Monegros Regional” by not even answering to the several email requests we sent them. This total lack of support from the organization certainly impacts the number and the size of the initiatives that our “proudly independent” Growing Nowhere team can handle on its own, while still promoting the Nowhere / Burning Man festivals and culture.

We are definitely happy with what we manage to independently pull off in support to the Nowhere community. We also see that the Nowhere organization is actually picking up many of the ideas we proposed, and launch them as they were their own – which is fine in a creativity sharing environment, we guess… At the end of the day, we are just happy to see things happening, wether we organized them on our own or if we’ve been an inspiration to others.

Stay tuned, as we are about to make some big announcement for this year’s Growing Nowhere project for Nowhere 2016. This time we are going all the way through, we won’t stop even if we get our project banned like it happened to the NO Farmer Market two years ago, or boycotted like it happened last year with the Temple Crew’s artist residency in Sariñena.