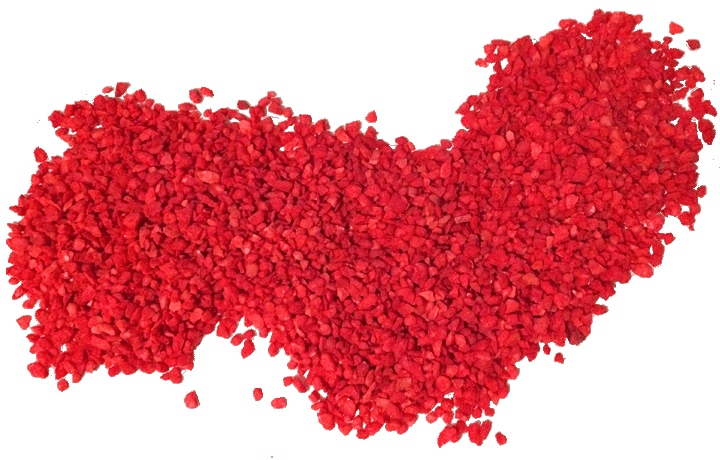 A Land Art
Project for
The Monegros

A site-specific land art installation for the Spanish Civil War trenches of the Ruta Orwell, in the amazing setting of the Monegros’ landscape. A contemporary tribute to George Orwell, to Los Monegros, and to a culture of peace.

The Monegros is a region rich with history and culture. From the vestiges of Roman domination to the medieval times that have left important highlights such as monasteries, churches and other vestiges and landmarks. Among the recent historic landmarks there are, of course, the remains of the Spanish civil war trenches, among which there are also those of the Ruta Orwell, where George Orwell fought for democracy 80 years ago.

Monegros also hosts a wide spectrum of popular and folkloric culture, from the many traditional romería to the uniqueness of dance and jota, with all the musical (and gastronomic) traditions that go along. The few museums and several centros de investigacion scattered across the region are all focused on celebrating the memories and traditions of the past, or the rich local biodiversity.

In my extensive local investigation of Los Monegros I had the pleasure to discover many other cultural “sparkles” across the region – photography, poetry, theater, music, film-making – but these “contemporary arts” are not getting properly promoted or supported at large, and basically occasionally emerge only thanks to the amateurish passion and commitment of individual artists or collectives.

One big “missing piece” in the cultural puzzle of The Monegros is contemporary art. Which is weird, considering that Los Monegros is surrounded by other regions that fully support the development and promotion of contemporary cultural initiatives. The province of Huesca, that claims a big part of the territory of the Comarca Monegros, has a very rich cultural calendar promoting contemporary art, cinema, music, and much more, with events, festivals and plenty of initiatives across its whole territory, from the Pyrenees to the Ebro Valley. But not so much in Los Monegros.

The province of Huesca even hosts a very interesting contemporary space, the Fundación Beulas and its Centro De Arte y Naturaleza (CDAN – Center for Art and Nature), that promotes nature as public space for the creation of contemporary art projects. CDAN, among other initiatives, has been running for many years the initiative “Arte y Naturaleza”, commissioning permanent site-specific land art installations to selected international contemporary artists such as Richard Long, Ulrich Rückriem, Siah Armajani, Fernando Casás, David Nash, Alberto Carneiro and Per Kirkeby. The project started in 1994, and kept going with the add-on of a new installation piece every two or three years until 2009, when Per Kirkeby created the last site-specific intervention of the project, in the open countryside. None of the art installations, distributed across the territory of the province of Huesca, has been planned for Los Monegros. The closest piece to the Monegros is the majestic permanent installation by Fernando Casás “Árboles como arqueología” in Piracés, barely a few kilometers outside the territorial limit of Los Monegros, and already in the neighbor Comarca de Hoya de Huesca.

The other major part of the territory of Los Monegros belongs to the province of Zaragoza. No need to say that Zaragoza is a living, pulsing city with a cultural scene that, on a European scale, can be easily compared to the likes of Bologna, Glasgow, Antwerp or Munich. But, as it happens on the Huesca side, none of Zaragoza’s contemporary and alternative cultural seeds seems to influence the arts in The Monegros.

Sure, there is the Nowhere festival bringing the Burning Man community to Los Monegros every year – but “what happens at Nowhere stays at Nowhere”, and all the arts and performances that fire up the Ruta Jubierre in the Monegros desert are destined to be packed up, stored into containers or burned, leaving no trace in the most classic burners fashion.

By personally promoting the Growing Nowhere initiative, I have tried to create more interaction between the art and the artists of the Nowhere festival, and the people and places of Los Monegros. We have built art in the city and created artist residencies for international artists of the burner community who needed local logistics, but it was always a brief initiative destined to leave no trace. I tried to place some of the Nowhere art in public spaces of The Monegros, but with no luck – I’ll probably try it again in the future, as every year there are many amazing art pieces created for Nowhere that deserve a “second life” after the festival week.

Among the projects I created for the Nowhere festival over the last 10 years – some of them as individual artist, others as part of artists collectives – there are a few art installations. As individual artist I have presented over time: Magnetic Dream Field (2008), Temple for a Lost Soul (2009) and Temple of Light at the End of the Tunnel. (2013). I’ve also been a member of art collective “crews” who have brought to the event several art installations, such as the COR Project (2014), the Temple of Reflection (2015) and the Temple of Self (2016). But all those installations, in the spirit of impermanence of Burning Man / Nowhere, were designed to be temporary installations, destined to disappear leaving no trace after the festival-long week, and to be interacted and enjoyed only by the participants to the festival, and not by the general public. 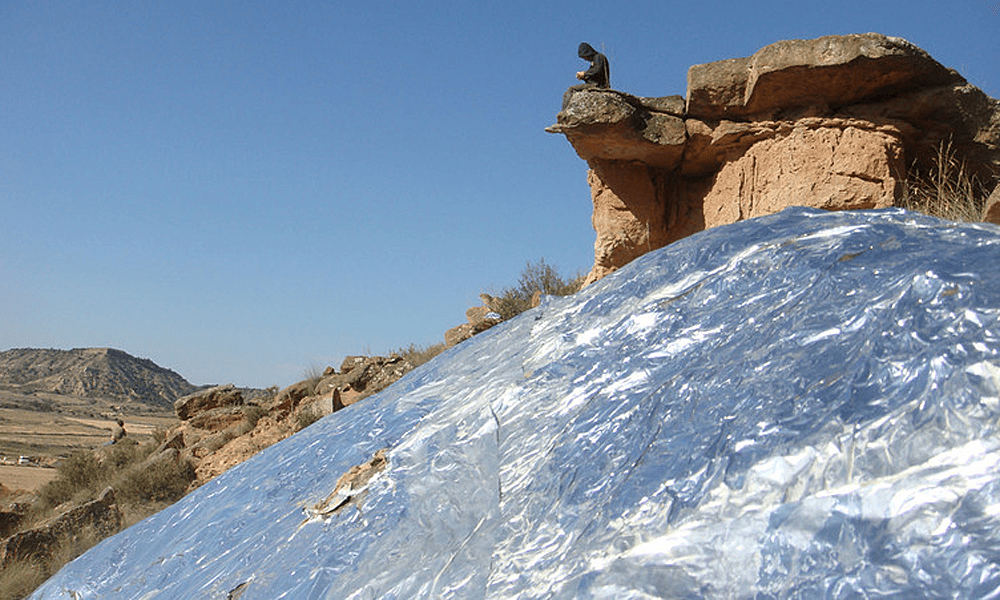 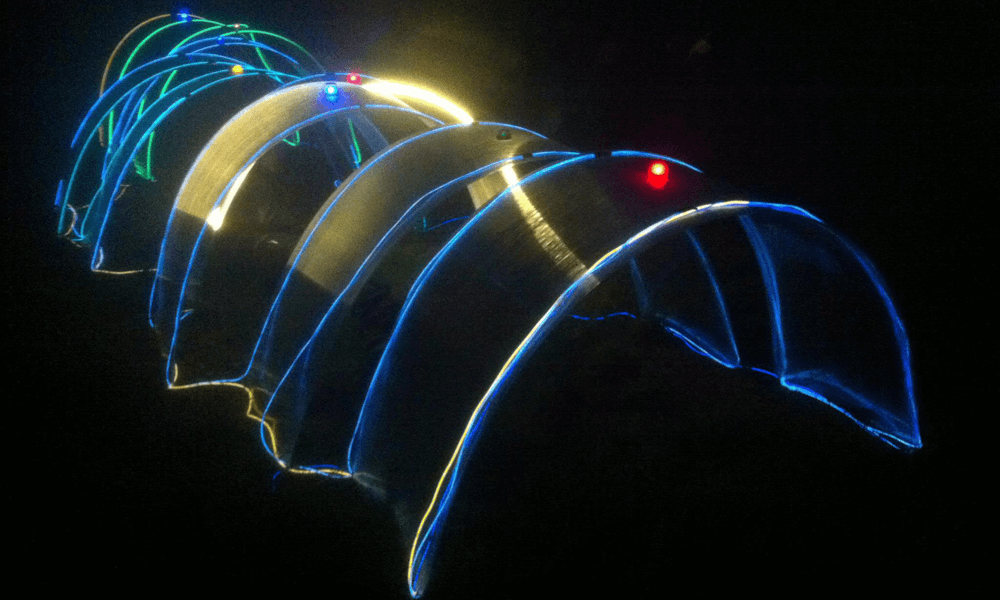 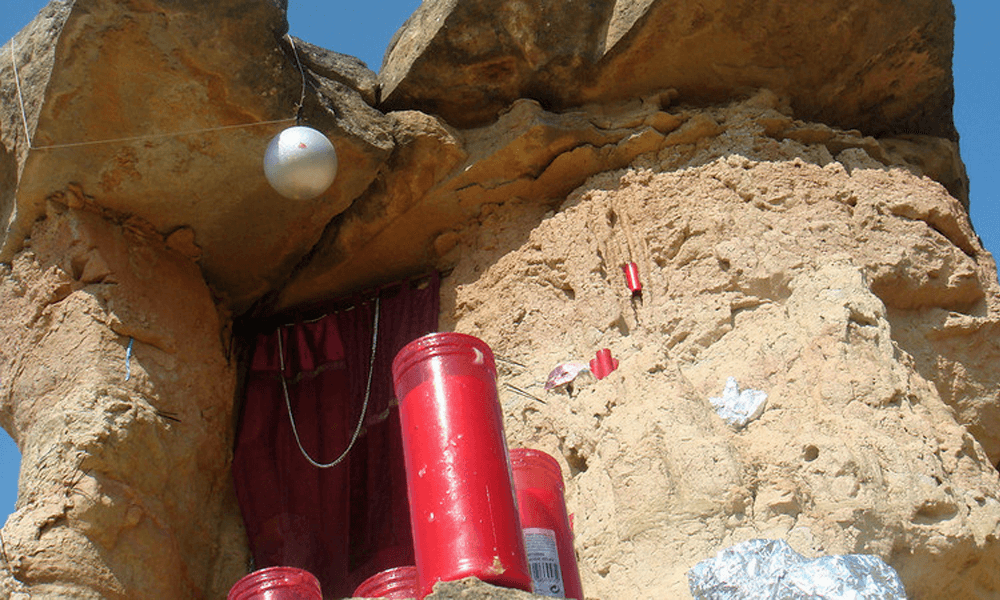 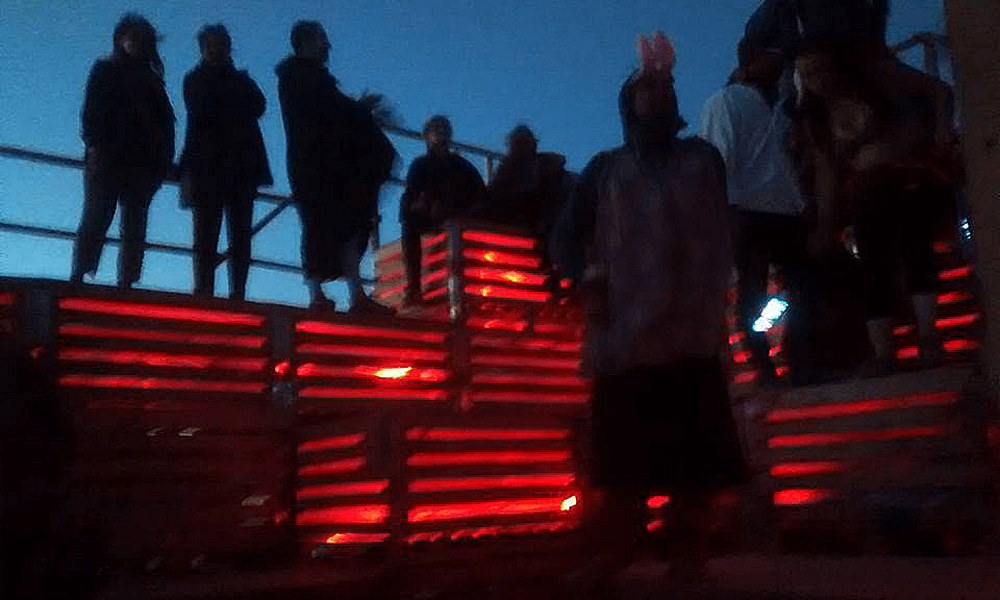 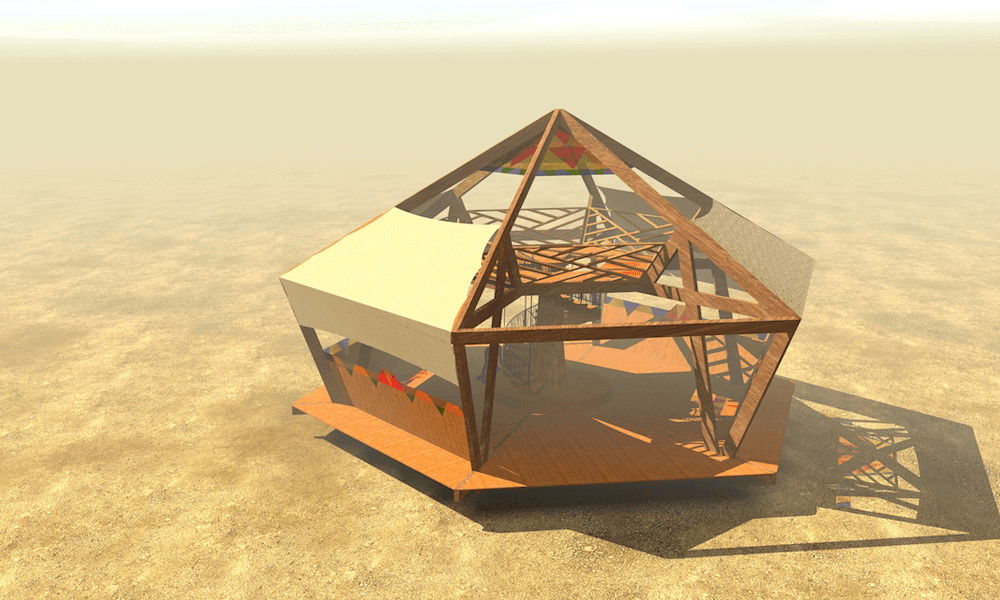 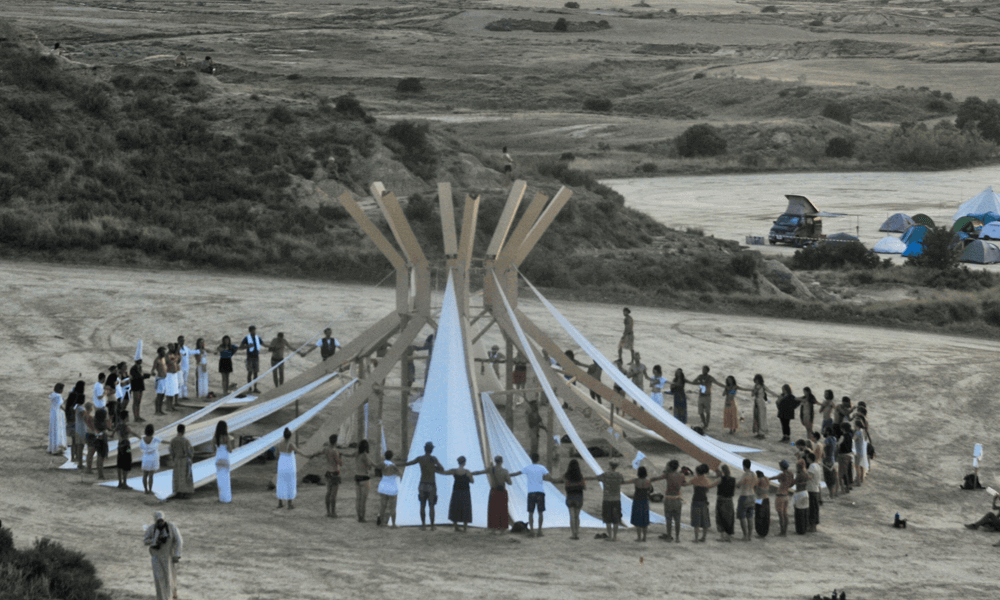 All this lack of permanent exposure of The Monegros to the languages of contemporary art is the reason why in my tribute to The Monegros I wanted to create something that can add creative and artistic value in the long term to the region. Something that stays. Not permanently, but certainly for a few years. I also choose not to impact the environment, so I have planned a site specific installation for the Orwell Trenches that will probably fade off in a few years, thanks to the combined interaction of the art installation with the extreme Monegros weather, plus the tear and wear due to visitors walking on it.

Homenaje a Los Monegros was originally designed with a very high degree of interactivity that included proximity cells triggering hidden audio and video devices in some key spots along the trenches, such as the bunkers or the sniper positions. Unfortunately, due to the remoteness of the location and the act of vandalism that target very often the civil war vestiges, the adoption and deploy of technology for the installation has been discouraged by several sources.

The final set-up of the site specific art intervention is very minimal, almost essential: a path of blood red gravel in all the walkable sections of the trenches. There is nothing more to say. There is not much to say that has not already been said about war in general, and about the Spanish civil war in particular – so I’ll better shut up, and leave the talking to the shouting visuals that say it all. After all, a shocking silence says it all about the horror of war. So minimal it is – less is more. 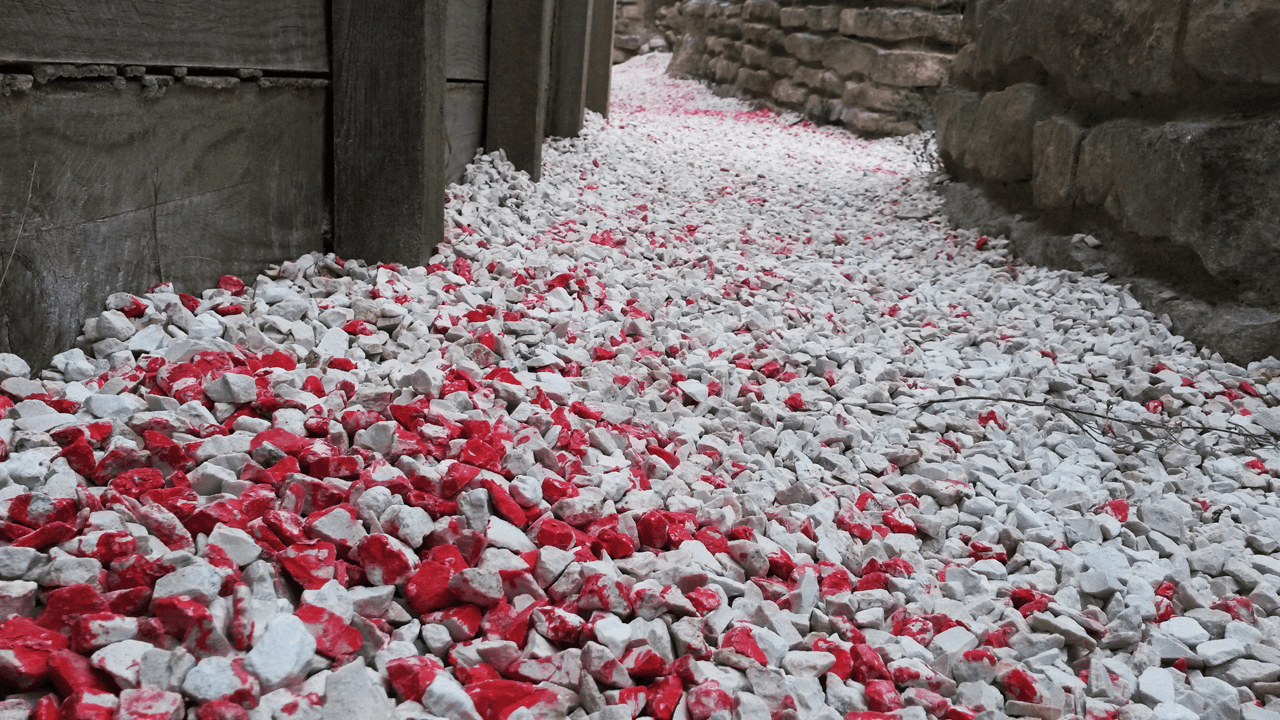 The intervention I designed for the Sierra of Alcubierre is inspired by the lifelong work of land art masters such as Christo and Jeanne-Claude, whose work I have been following and admiring since my early discoveries in contemporary art. There are also plenty of other influences in my land art work, and maybe I’ll wright about it sooner or later in the project blog.

Homenaje a Los Monegros is a permanent, outdoor evolution of the work I have been doing with post-it notes for years. Where each single post-it note in an installation of thousands represents a single memory, in Homenaje a Los Monegros each single red gravel stone represents one lost life, in the millions of lives that humanity has lost and keep losing in wars across history. Walking on those millions of lost lives, with the sound of each step that will echo in the silence of the remote location, will create an additional organic strong impact, such as walking on bones (see the mock-ups of the installation below).

The installation for the Orwell trenches could have been designed for any of the thousands of trenches that humanity has build to fight wars. As a matter of fact, I first had the idea for a land art installation in the trenches after my mother visited the those located in the Alps, where my grandfather fought during World War II. But while the majority of wars are fueled by power struggles, economic interests or hate, the war fought in The Monegros by George Orwell and the international brigades was one of the last wars that Europe have seen where freedom, democracy and justice where at stake – which, while I’m still against war and all its horror and miseries, I somehow respect.

A tribute to George Orwell, a tribute to Los Monegros and to its land, people and cultural heritage. A tribute to the historic memory and a reminder about the miseries of war, a story of pain told with a contemporary, visual, conceptual language very much needed in The Monegros. My personal tribute and homage to the memory of places that I now call home. 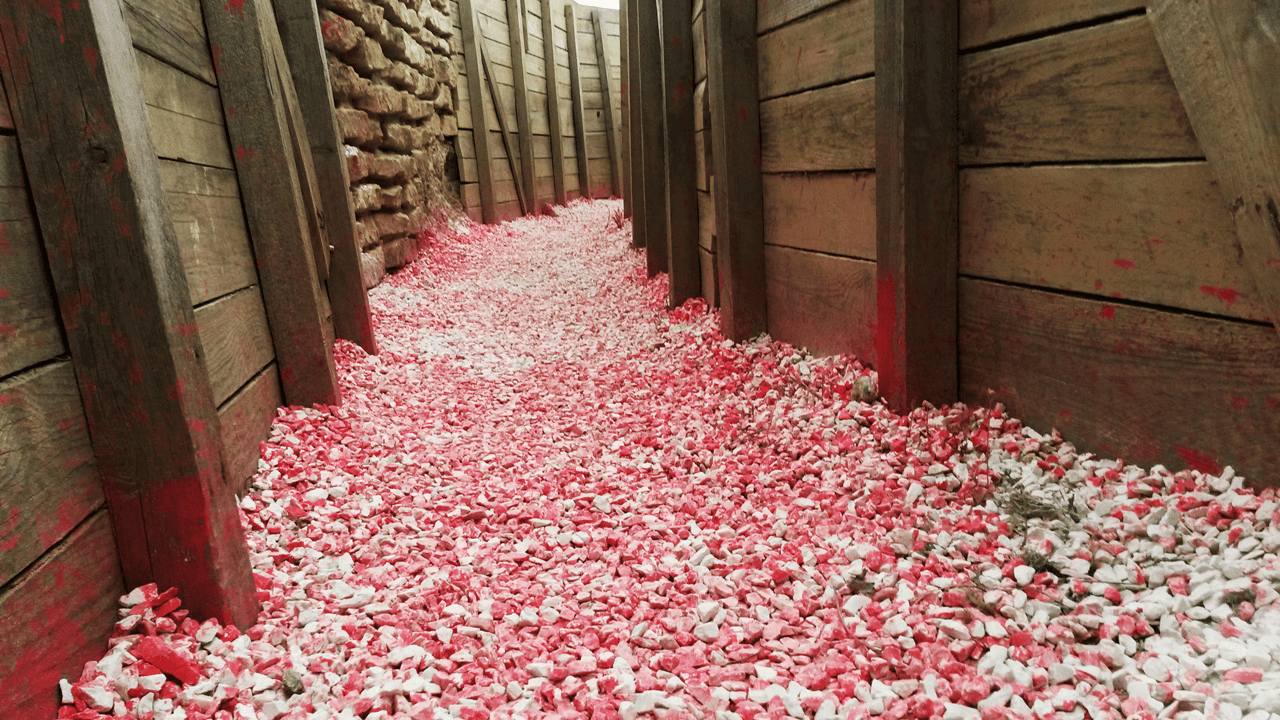