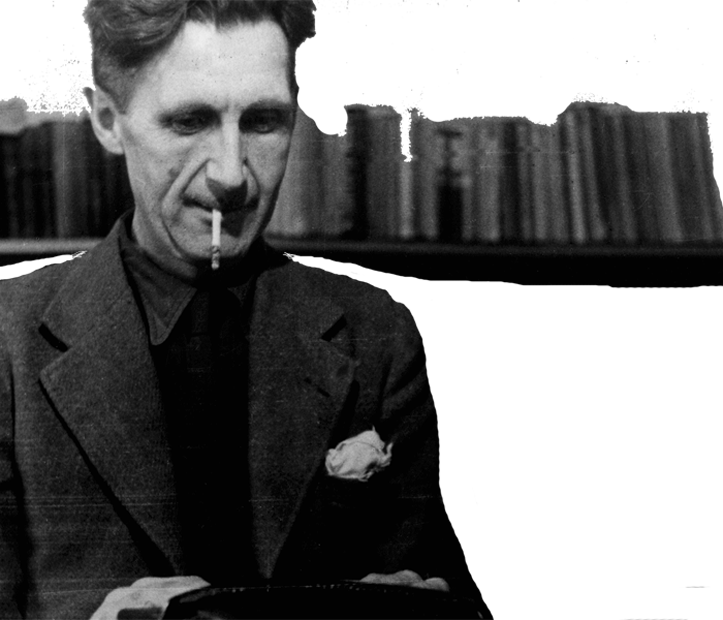 A Tribute to
George Orwell

A Tribute to George Orwell

George Orwell has always been one of my heroes, for as much as I can remember.

I was around 8 years old when I got fascinated by the Animal Farm cartoon movie. The adaptation of the classic novel by George Orwell was certainly not a cartoon like many others I was devouring back then as a child. There was something about that sense of auto-determination of the farm’s animals, the miseries of their human owner, but mostly about the corruption that comes with power, that stuck with me since then.

Those were the early 70’s and, even if I didn’t have the right age for a full “hippie season”, those concepts of equity, justice and democracy really provided some ethical and early political building blocks to my childhood education. 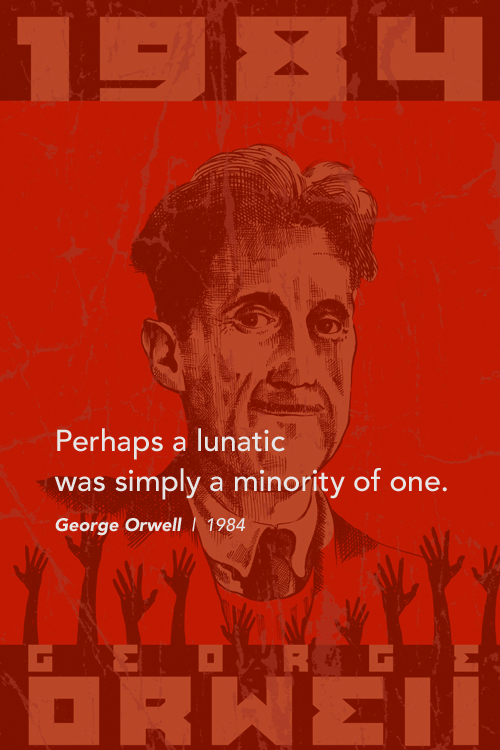 A few years later, when I was 15 or 16, I got totally sucked in by the dystopian scenarios of George Orwell’s top classic novel, 1984 – I think I read the book three times in a row, and I remember that I was using some of the book statement as (cynical) catchphrases. It was before the year 1984, so the date projected by the British writer really sounded like a scary scenario for a future about to come.

Add to the scenario that Italy (and Sicily, where I was living back then) was in fact pretty screwed up as a society, with widespread political corruption and state terrorism on a side, and the oppression created by the mafia on the other side – specially in Sicily, but pretty much everywhere in Italy – and 1984 didn’t seem so far to become a next reality scenario. Things didn’t get better over time, with plenty of Big Brothers from Democrazia Cristiana to Craxi, from Berlusconi to Mani Pulite, from Gladio “stay-behind” operation and P2 masonry to Echelon and everything unveiled by Wikileaks – but this is another story. Back then, towards the end of the ’80s, Palermo and the rest of Sicily were in a state of emergency due to the State’s war against mafia – a total “state of war” with armed militaries and tanks in the streets, and the constant thread of bombs in public spaces. Imagine the situation we live today across Europe with the thread of terrorism, but with way more military presence in the cities. A truly dystopian scenario right out of Orwell’s worst nightmares.

I have always been into music, movies and technology, so when a couple of years later, in 1984, the homonymous classic movie hit the world, with a soundtrack by Eurythmics that rocked the international charts, while Steve Jobs at Apple was announcing the digital revolution of MacIntosh computers with a video ad directed by Ridley Scott and inspired by Orwell’s Big Brother iconography, I thought that there was no more escape from that scenario. 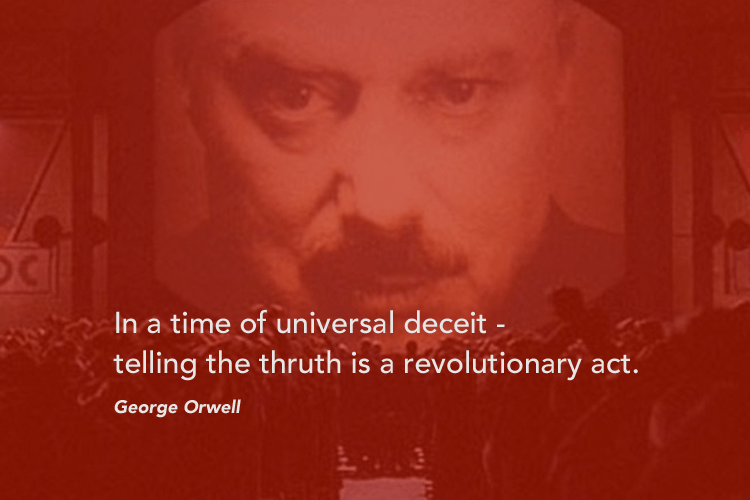 But, as George Orwell sorted out in his 1984 masterpiece, there is always a way out for those who are willing to fight against injustice, so I adopted a revolutionary spirit that has been the driving force behind every commitment I have taken in my entire life. A revolutionary spirit that I have been pursuing and expressing not only through civic and political activism, but also through art, with my ventures into photography, painting, sculpture and, later on, environmental and land art installations.

A few years later, in 2003, life and art took me to Burning Man. After participating to several festival in the Nevada desert, I discovered Burning Man’s official event in Europe, the Nowhere festival in The Monegros, that I have been regularly attending (and also organizing for many years) since 2007. A new love story was born, my love story with Los Monegros, where I finally moved in 2015 after living a few years in other parts of Spain – Asturias, Barcelona and Madrid. And guess what? Unexpectedly, I was following again George Orwell’s footsteps, this time by sharing with the Master the experience of a physical place, and those amazing landscapes where Orwell fought for democracy and justice – for real, to the point of almost getting killed for it (he actually got shot in the throat). 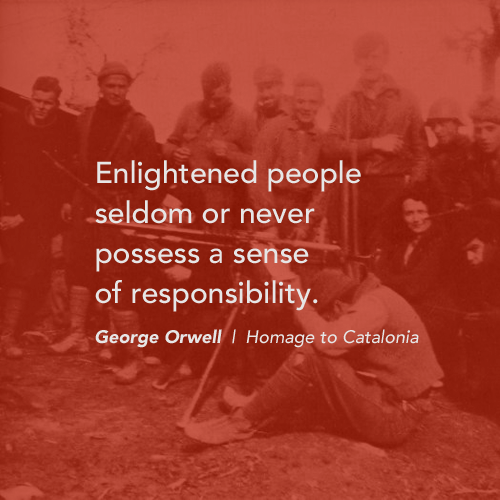 2007, the year I discovered Monegros, was also the 70th commemoration of the Spanish Civil War, and various local Monegros institutions celebrated the anniversary of George Orwell’s presence in The Monegros by restoring the civil war trenches where he fought for months (also according to his report of the events through the book Homage to Catalonia) and, in general, starting promoting the historic landmark by creating an easy hiking route, the Ruta Orwell.

I have visited the Orwell Trenches very often during my Monegros explorations of the last 10 years and, since I moved to live in the area, I have started exploring them and their surroundings frequently, often staying for an entire day or many hours in the area, enjoying the silence and remoteness of the Sierra of Alcubierre, as well as the amazing “monegrino” landscape. The trenches are for me a place where to meditate, to retreat, and even to pray – I always recite meditation mantras when I’m on site, they help me achieve a state of inspiration.

But, after reading Orwell’s “Homage to Catalonia”, researching about the Spanish Civil War in the local “Frente de Aragón” (The Aragon Front where the two factions confronted for more than three years), and also by constantly being exposed to the news of all the wars that keep scattering around the world, to me the trenches are also a place of pain. And death. Not only the violent physical death of human beings, but mostly the death of ideals, as well as the death of civil rights, democracy, and decent living in a sustainable planet and environment. War brings death and destruction, that’s for sure – but it is the corruption and death of the human spirit that brings plenty of miseries to humanity, and war is one of them.

The Orwell Trenches in The Monegros are a big source of inspiration for me, and the depth of the Monegros landscape is the perfect white canvas for my deep thinking – I believe that this amazing location of the Sierra de Alcubierre, a true cultural landmark, should be experienced by many others. Unfortunately, since the Orwell Trenches have been restored 10 years ago, the historical site quickly declined into a state of abandonment. The convergence of time passing under critical desert conditions, the lack of sensibility by those who keep vandalizing and even stealing from the trenches, the cuts in local administration budgets brought by the last neverending “crisis of 2009”, and the lack of a proper touristic promotion of the area, have deeply impacted this Monegros cultural heritage site. 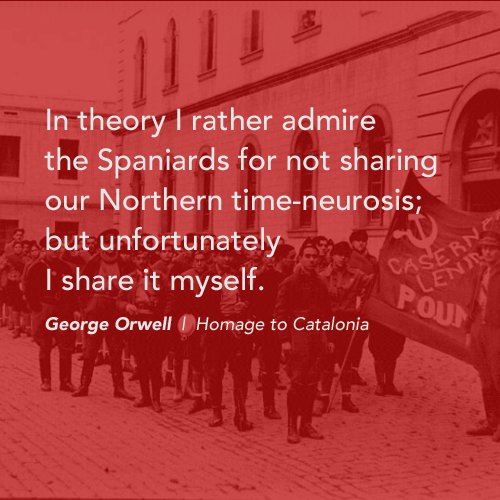 This is why, moved by a personal “connection” to George Orwell and a huge respect for the revolutionary author and thinker, I feel compelled into offering my personal work and creative input to honor the Maestro Orwell, by reinterpreting many of the feelings he expressed in his work through a site-specific land art installation in the places that have seen Orwell “in action” while fighting for idealism – this time not only through his powerful words and books, but in the front line of an actual fratricide civil war.

My tribute to George Orwell is not only meant to consolidate and reinforce the memory of the deep relationship between the British author and Los Monegros, but will also impactfully evoke that sense of death of the human spirit that is responsible for the miseries of our current society, among which the many wars humanity has and is going through, and that The Monegros has experienced in full for the entire duration of the Spanish Civil War.

A tribute to Orwell that it is a reflection on history and the present, on the collapse and fail of ideals that should empower a better society, and the consolidation of a social degradation that is core to today’s human existence.

A tribute to the man who alerted the world about a dystopian future that’s already here. And to the man who thought that we can always fight all the Big Brothers in the world, to break free from the chains of social decadence and move into a positive consciousness zone. Thank you, George.