Welcome to WTF – Wonderful Techno Frequencies, the new Web Radio Show by Burningmax for Pot Radio – enjoy a weekly exploration of the wonderful frequencies and beats in techno and beyond, hitting all corners of electronic dance music.

Follow the weekly radio show on Pot Radio, and listen and download the recording of the sessions here and on MixCloud. At this page you can listen to all the broadcasted shows and download them all for offline listening, and you can also download the music mix of each show with no speaker voice, so you can use the sets for your dance parties! Enjoy!

Thank you to all the radio show listeners for following me, and to Pot Radio for giving me the opportunity to share my favorite music and my DJ skills. Special thanks to the Rome-based artist and friend @aladin for the design of all the radio show covers – check him out at his Instagram page, you’ll love his work.

Follow this link to learn more about the radio show or check out the episode archive here below. 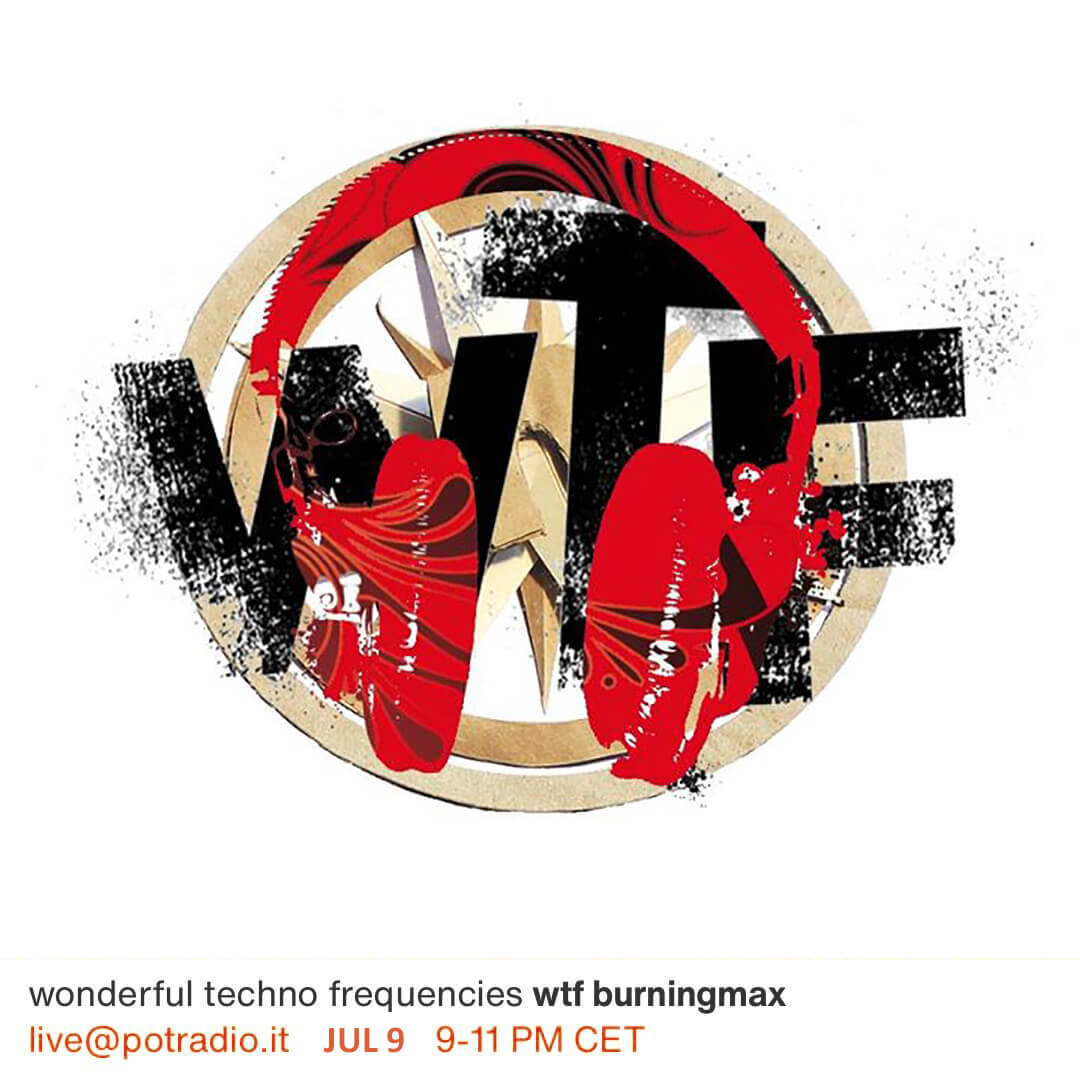 This is episode 01 of the new radio show on Pot Radio. Pretty much a pilot, with a bunch of tech issues that I fixed starting from episode 02. The playlist is eclectic, I hope you will enjoy it. 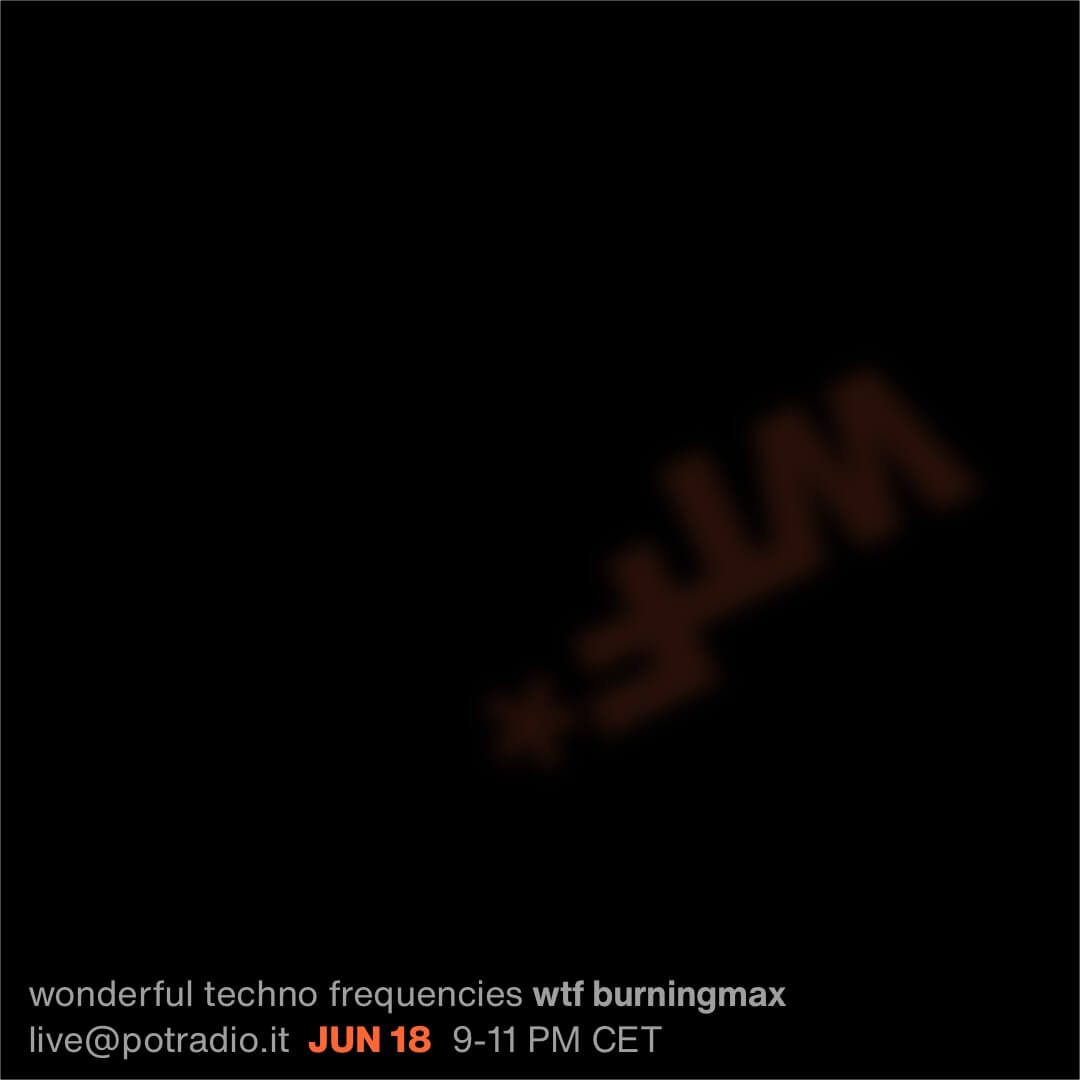 Second episode of WTF in support of the #BlackLivesMatter movement, and advocating also for #StopRacismEverywhere and #NoMorePoliceBrutality. We explore sounds and beats of black and brown djs and producers of the electronic scene of the last 5 years. #BlackTechnoRocks 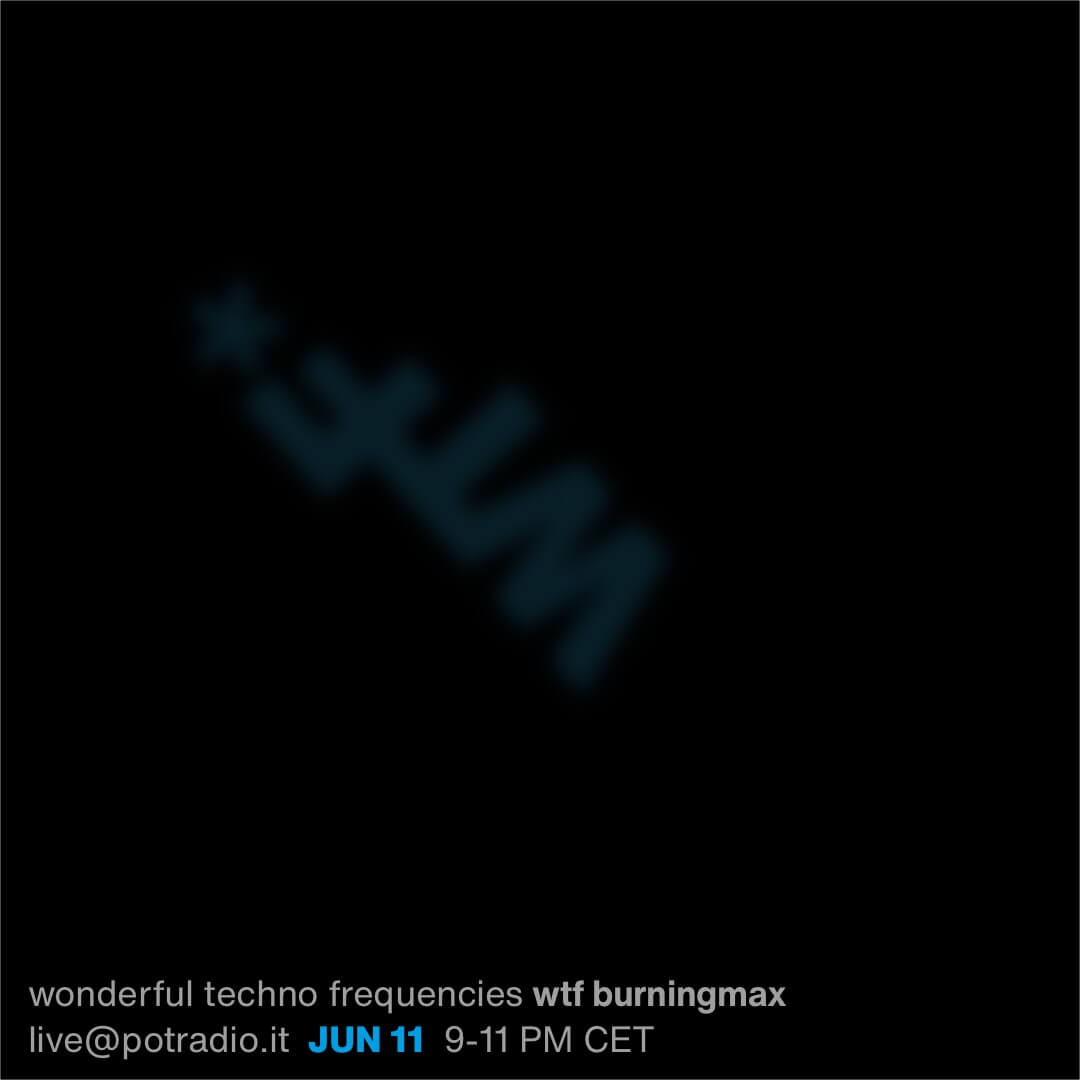 First episode of WTF in support of the #BlackLivesMatter movement, and advocating also for #StopRacismEverywhere and #NoMorePoliceBrutality. We explore sounds and beats of black and brown djs and producers from the early electronic scene of the late 80s early 90s, all the way to 2015. #BlackTechnoRocks 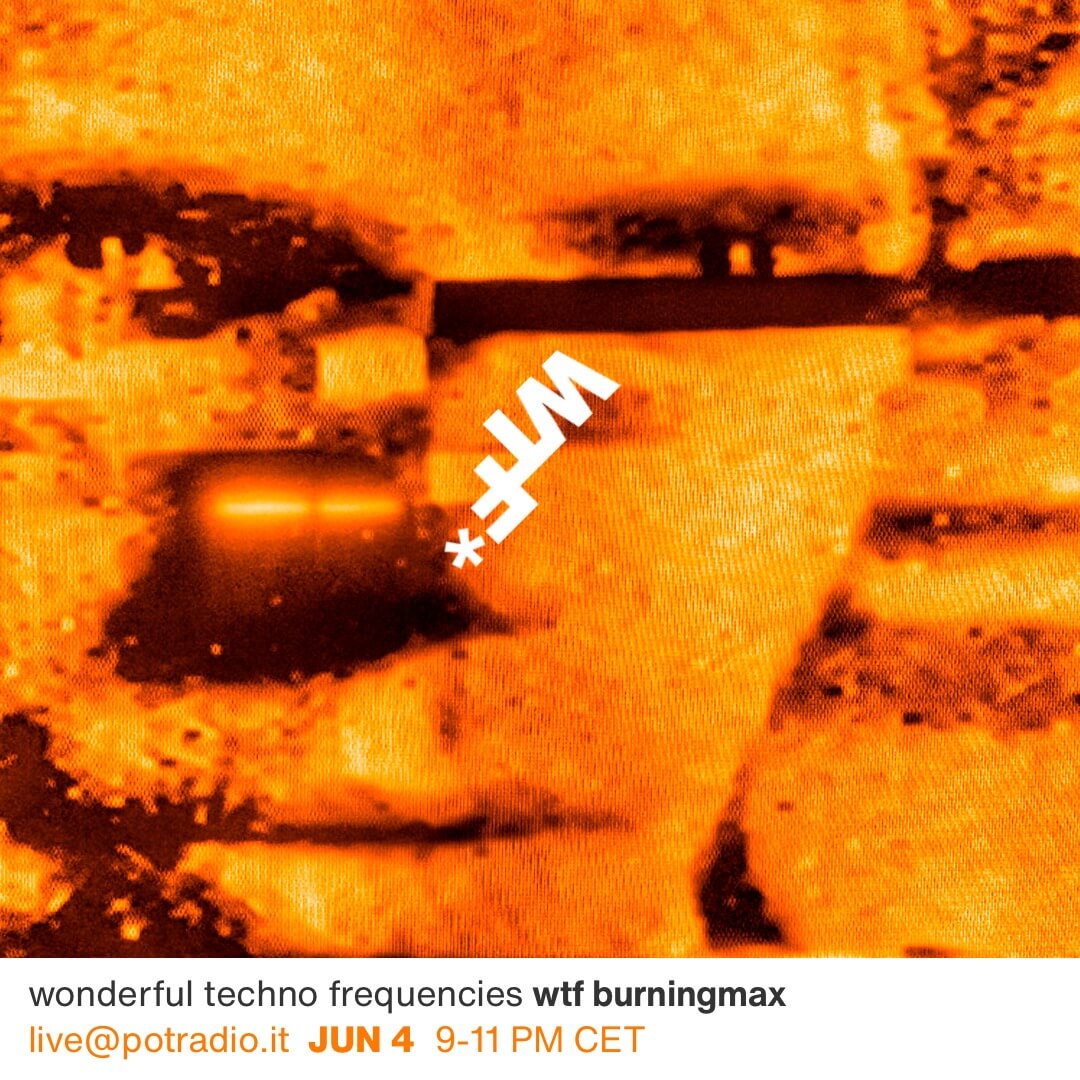 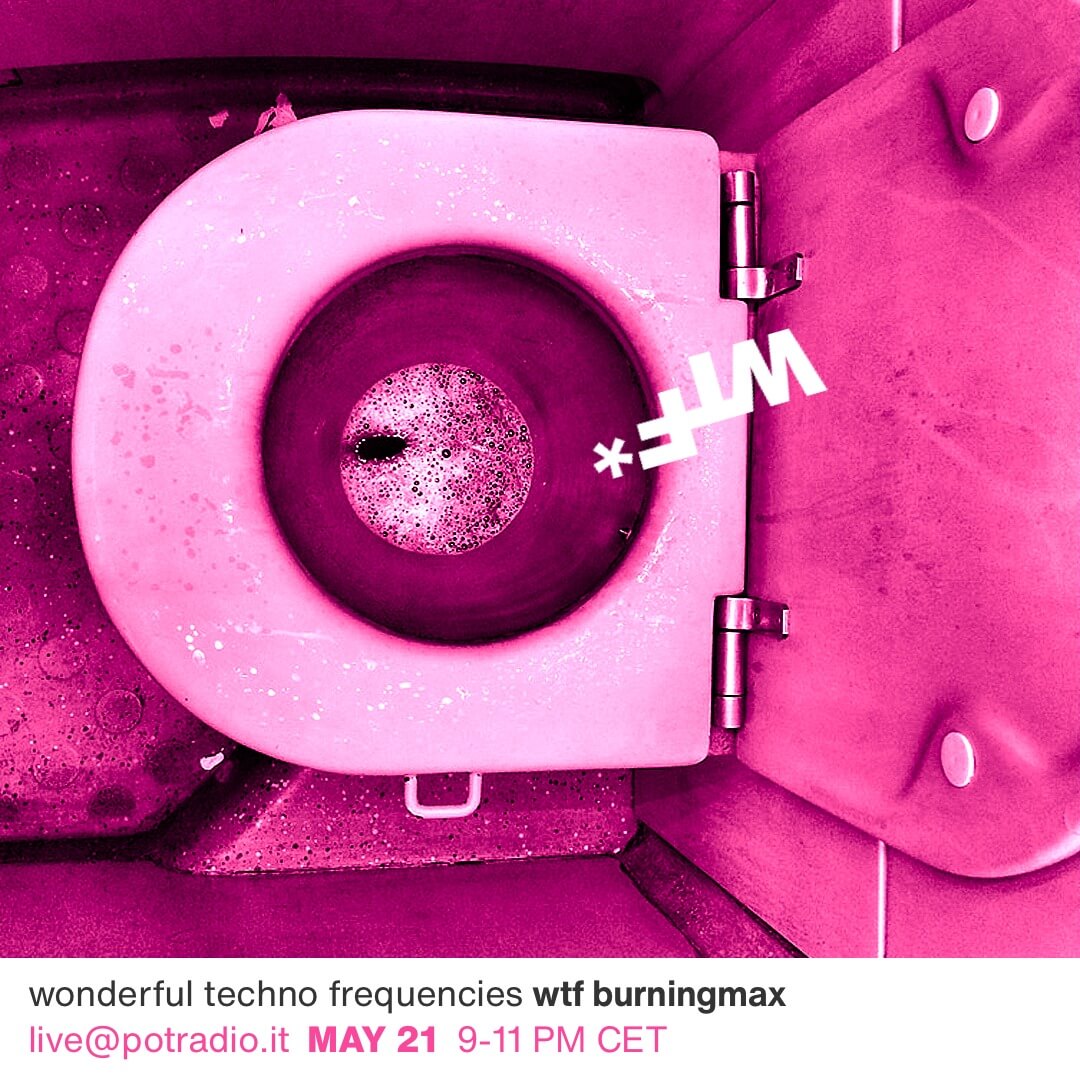 Episode 07 of the radio show on Pot Radio. Another evening of techno tunes with Burningmax. 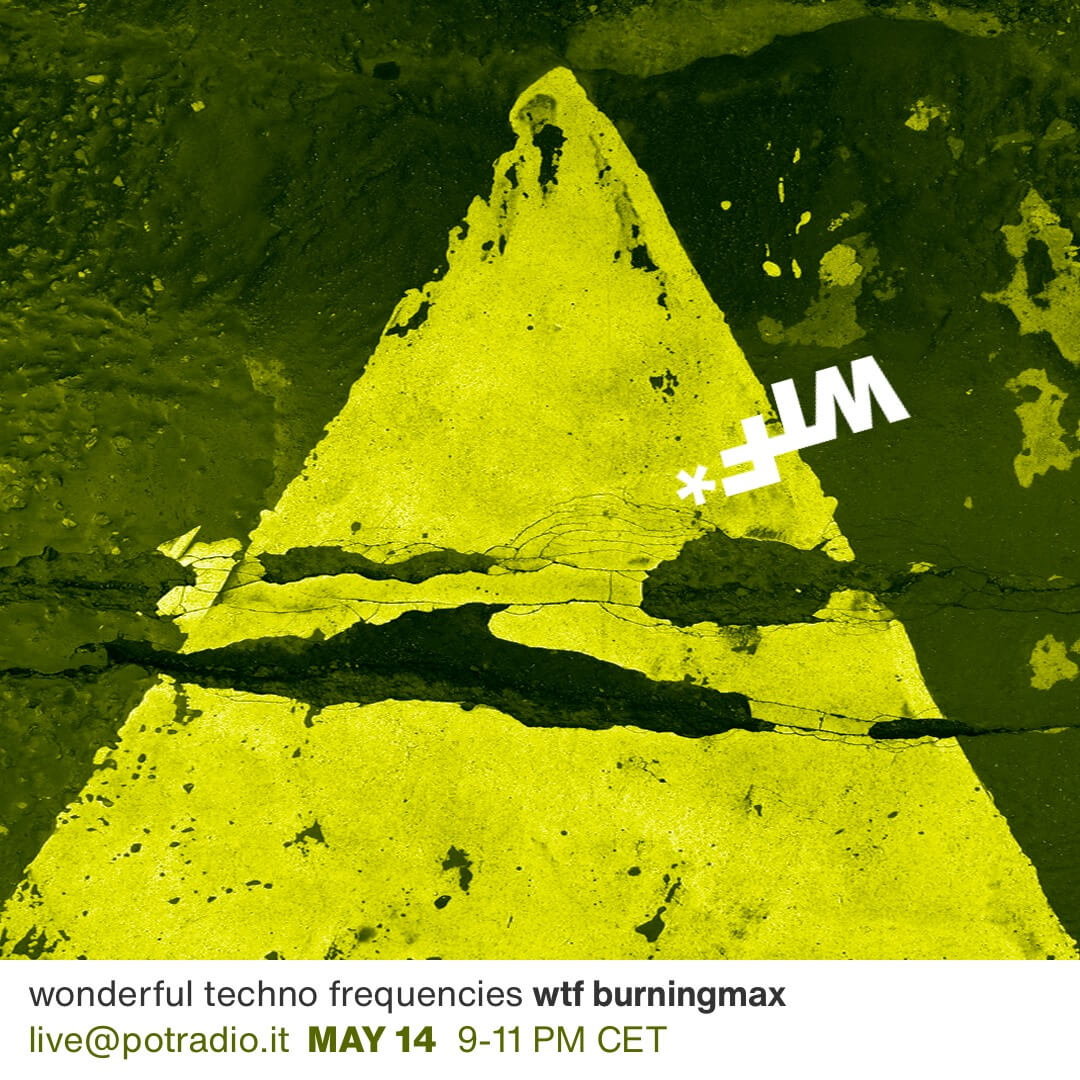 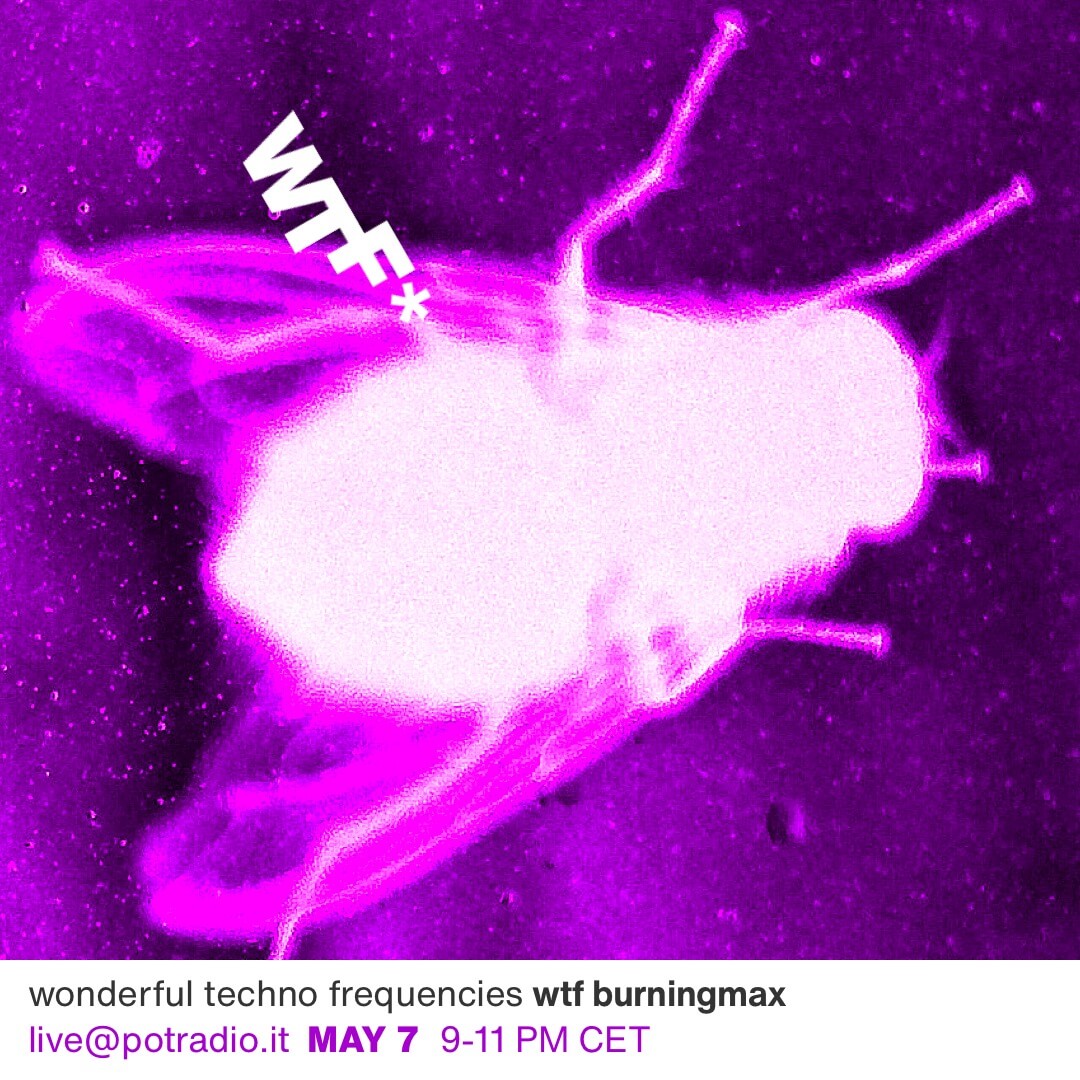 Episode 05 of the radio show on Pot Radio. New tracks – techno, some bass tracks and the usual experimental few. 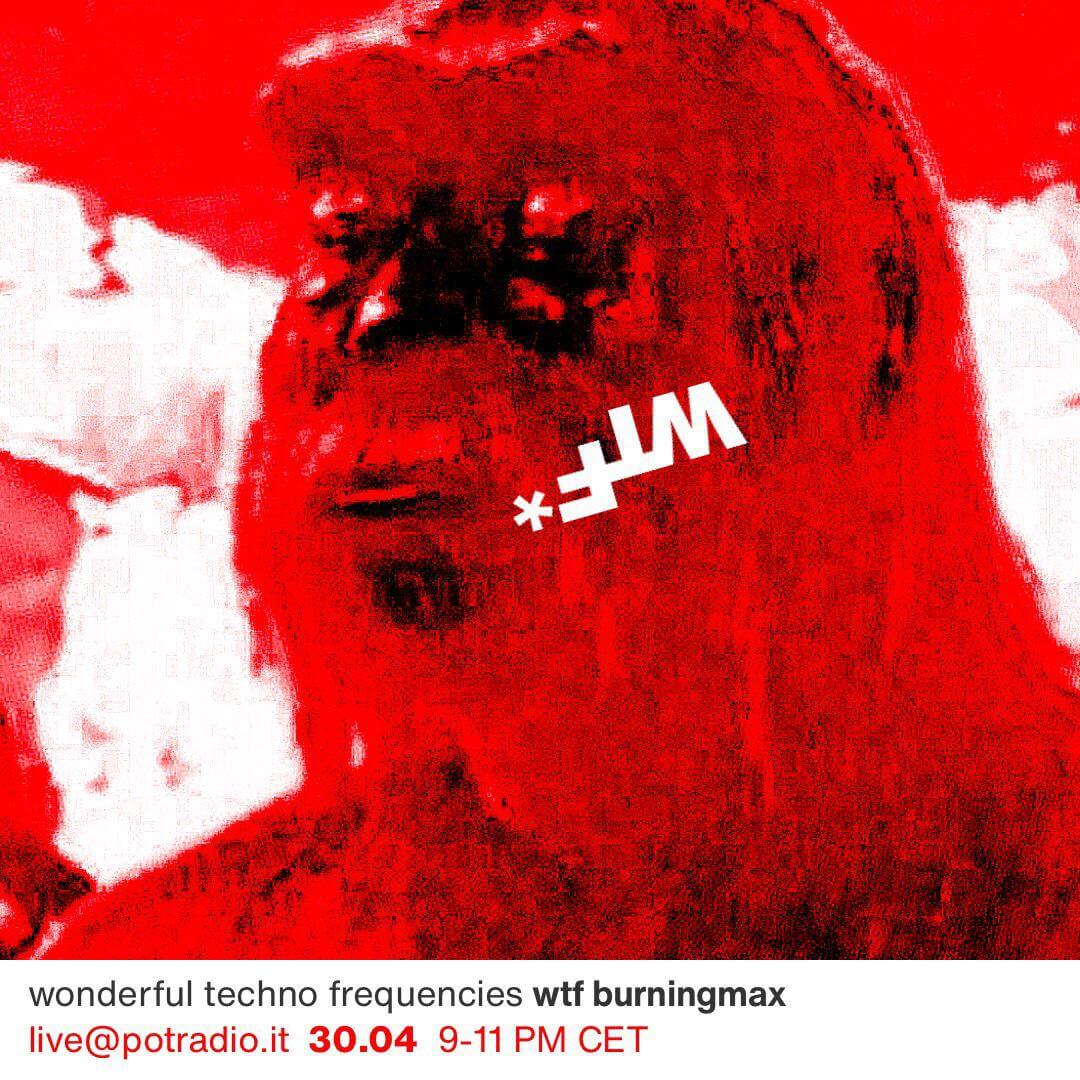 Episode 04 of the radio show on Pot Radio. Pretty much all new tracks, freshly released. Techno, some progressive sounds, a bit of experimental tracks and more. 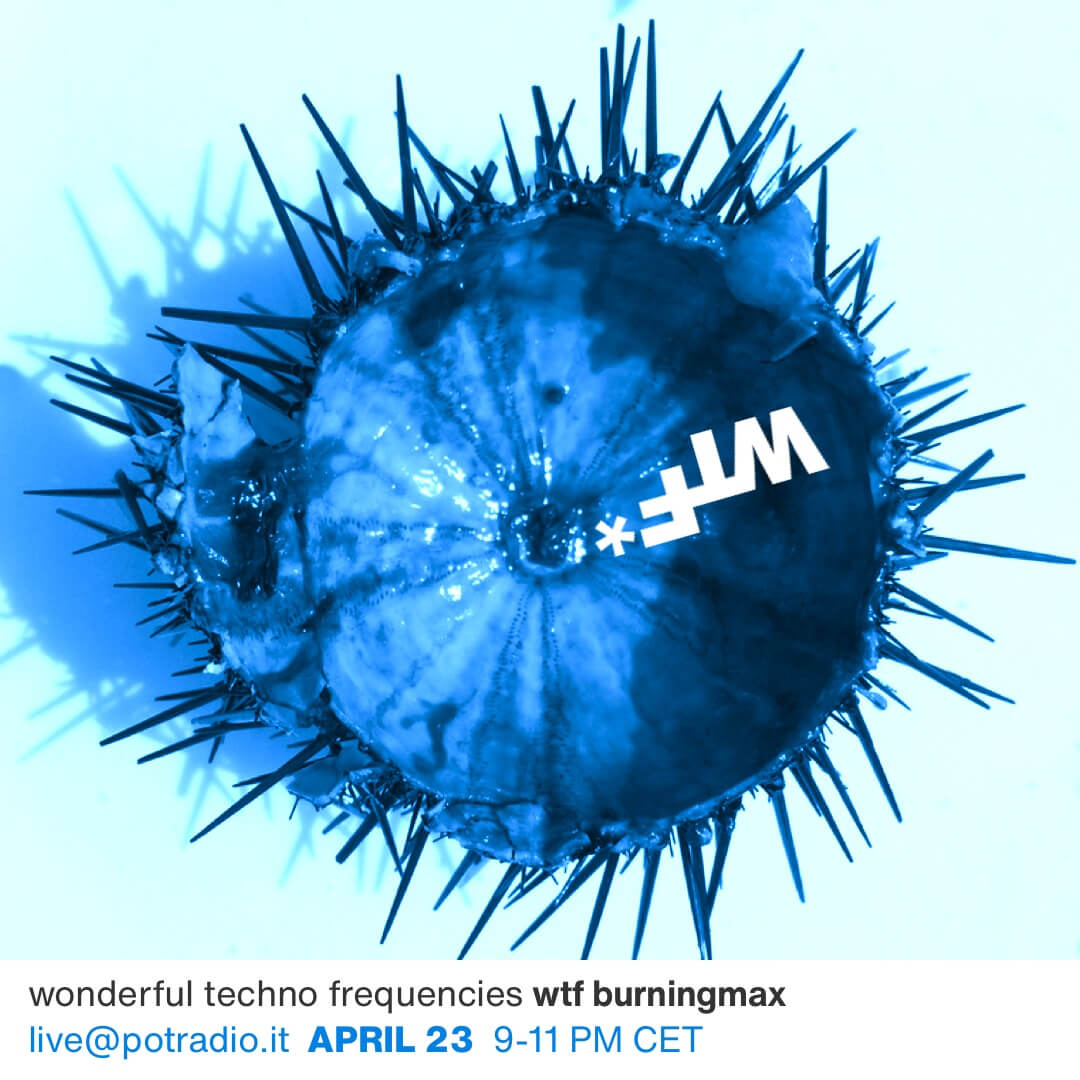 Episode 03 of the radio show on Pot Radio. New tracks as usual – techno, mostly rave, some experimental sounds and more. Featuring a new remix by Burningmax. 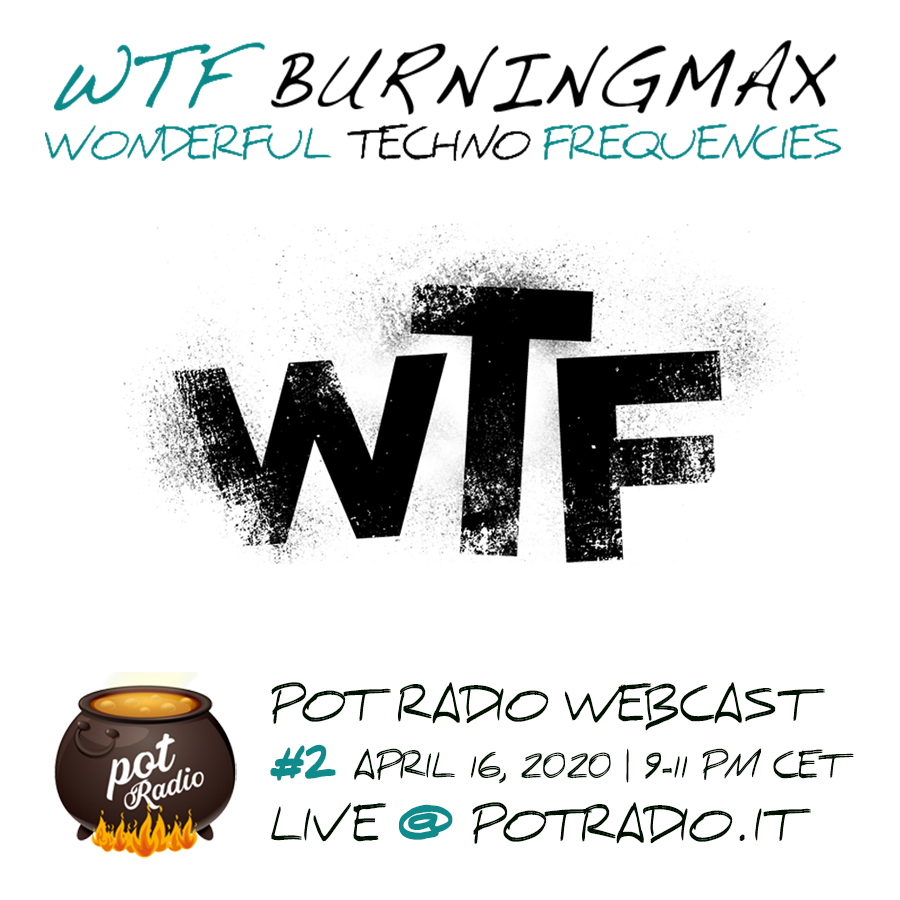 Episode 02 of the radio show on Pot Radio. Pretty much all new tracks, just released in the last 3 months. Techno, mostly rave, some experimental sounds and more. 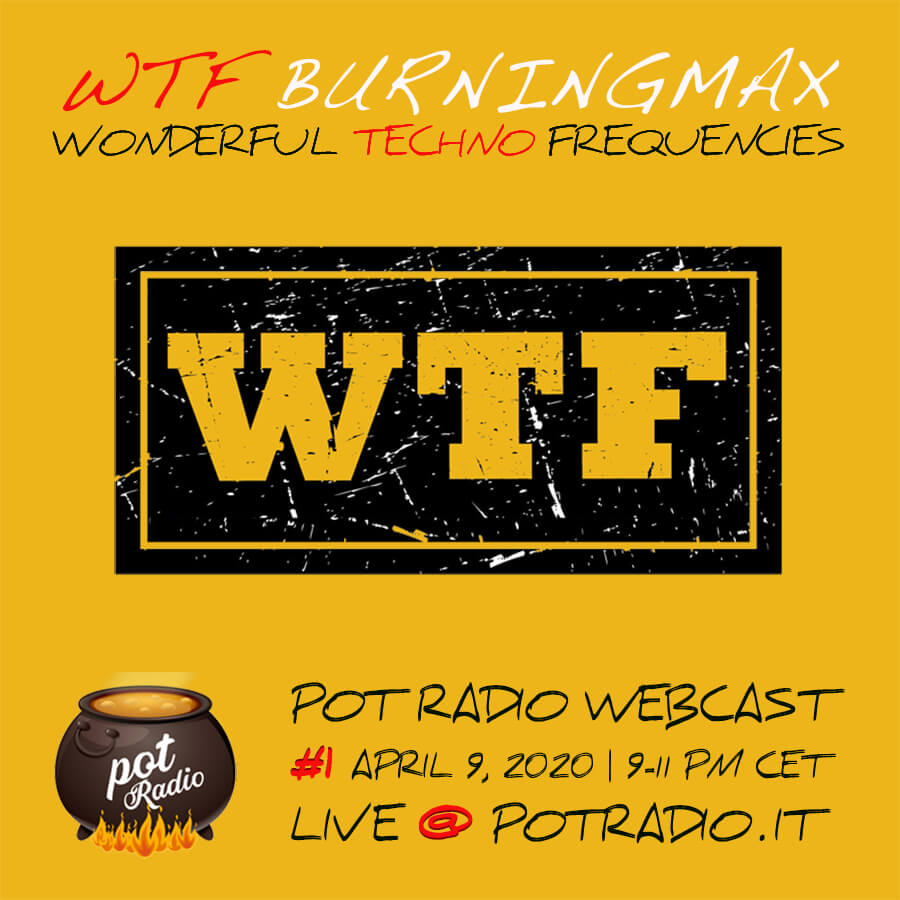 This is episode 01 of the new radio show on Pot Radio. Pretty much a pilot, with a bunch of tech issues that I fixed starting from episode 02. The playlist is eclectic, I hope you will enjoy it.

ABOUT THE WEB RADIO SHOW

The focus of WTF remains on techno, and on non commercial quality electronic music, that will inspire you to don’t stop dancing, with an eye to the “super hot” latest release productions. There will also be surprises, such as Burningmax exclusive live remixes for Pot Radio and the occasional special guests.

The frontiers between techno and electronics are virtual, so we will dance to sounds and beats also from the house, trance, experimental, drum and bass and (occasional) dubstep planets, exploring all the magnificent dance frequencies, from hypnotic to powerfully deep, from psychedelic to noise. But also hip-hop and dub, to maintain the “spiritual” connection with Pot Radio and with our favorite plant!

WTF! Wonderful Techno Frequencies is on air live on Pot Radio every Thursday evening from 9PM to 11PM on Central European Time (CET). Don’t miss it! But if you miss a show don’t despair, you’ll be still able to find all the podcast episodes on my MixCloud profile, and of course also on this page, where you van also download either the full podcast episode or just the music mix, or both!

ABOUT THE RADIO HOST

Massimo began broadcasting on the radio in the 1980s, with a new wave, post-punk and indie rock music program, and with the name DJ Sonic. After that seminal radio show, which lasted a couple of years, he continued to produce mixtapes, compilations and mixes to be handled out to friends, and to sweat on dancefloor around the world, under any “influence”, from rock to dance.

In 2008 Massimo got his hands on a DJ console at the Burning Man festival, and since then the “fever” of the mix never left him: Burningmax was born, which in the last 12 years has played live in festivals around the world and explored the world of production, with a handful of remixes to its credit. With WTF Burnigmax returns to the radio – back to the roots!

These mix are just for fun and not for commercial use. Copyright for each tune is owned by their respective artists and/or publishers. For more info on copyright see this page. Plus, hosting the DJ mix on MixCloud means that the artists recorded on each mix actually get royalties from the streaming platform.