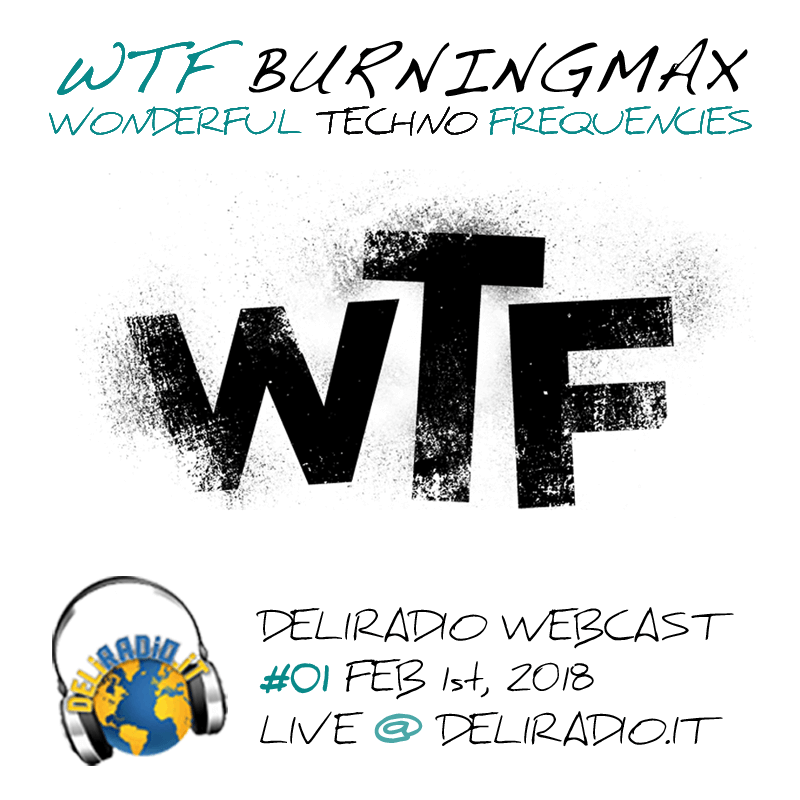 What the Fuck! I’m back on the radio after almost 25 years, when I was running a regular radio show on a local radio in Palermo, blasting post-punk new wave, indie rock and psychedelia. Good times! Pretty good times now too, specially in planet techno, where productions of new instant classics are released pretty much every day.

And it’s a good time to go back to the radio too, specially if the radio is the Rome-based Deli Radio, a web radio whose live broadcasts can be listened over the internet all over the world (and through streaming apps, too).

So here we go with a new gig: WTF / Wonderful Techno Frequencies – a regular webcast and radio show that will go live every Thursday from 9PM to 11PM CET (Central European Time), and with a format inspired by Laurent Garnier’s famous podcast “It is what it is”. Every episode I will play freshly released tunes and rare old classics, while giving plenty of information about the tracks, the producers, the labels and the cultural techno scene, but also giving plenty of space to the music, that I will mix live, sometimes not intervening for two/three songs in a row.

WTF includes a special Burningmax remix project, specially designed for the Deli Radio webcast: WTF Jinglex. As I needed some radio jingles for the radio show, I asked several friends around the world to send me some shout outs on whatsapp, with silly talks about techno. I later edited the voice recordings and mixed with a music base, created by remixing a few tracks of Laurent Garnier, my top techno inspiration. The results are not real remixes – more radio jingles than proper tunes, but good enough for the dancefloor, and long enough to be actual tracks (5-6 minutes each), with my guest friends providing the “vocal entertainment”. A jingle that is actually a remix but still serve as a jingle – a jinglex! =)

I have already produced the first few jinglex, but I will be revealing them one at the time – one per webcast, with the one guest friend per jingle. Sort of “Burningmax and friends remix Laurent Garnier for Deli Radio“. All the jinglex will be posted on my SoundCloud account and added to a WTF Jingles playlist that will be growing over time, and will be also posted on this website (to be announced soon).

Enough talking – here is the first WTF / Wonderful Techno Frequencies webcast for Deli Radio, featuring PiouPiou from Paris for vocal input on the jinglex, which in this case is a banging base remixed out of Laurent Garnier’s “It’s Just Muzik”. Enjoy, and tune in to Deli Radio.

Liked Burningmax WTF – Wonderful Techno Frequencies – Deli Radio Webcast 01?
Download the DJ set from here, enjoy it and share it with your friends!

Liked the webcast? Here is this episode’s jinglex featuring PiouPiou.

This mix is just for fun and not for commercial use. Copyright for each tune is owned by their respective artists and/or publishers. Deli Radio pays regular monthly royalties to the music industry. For more info on copyright see this page, and check out the radio show page on Radio Deli.