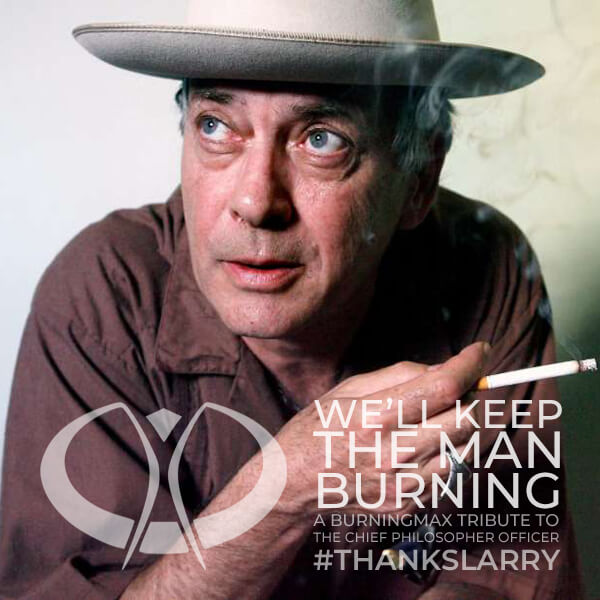 A Burningmax tribute to Larry Harvey, Burning Man’s founder and Chief Philosopher Officer. Larry Harvey passed away a couple of months ago, and June 21st has been declared Global Celebration / Day of Gratitude for Larry Harvey.

I have dedicated Larry’s Gratitude Day to listening to several Larry Harvey video interviews and keynote presentations on YouTube (links below), then I decided to get some of the inspirational phrases he said out of those videos, and to mix them in a techno DJ set / studio mix.

There are a couple of flaws here and there, specially with the lack of equalization of Larry’s recordings, and a couple of saturated basses here and there – but this has been a “one shot recording”, a sort of “live at home”, in my headphone. Immediacy, no post-production. I hope you’ll like it, and will get inspired too.

As a matter of fact, I’m not sure if Larry would appreciate this, because, you know… techno was not his strong hat. But this is certainly the best way for me to say #thankslarry. You have been, you are and you will be one of my primary sources of inspiration, and so is the international community that spurred out of your hat. We’ll keep The Man burning.


Liked We’ll Keep The Man Burning | A Tribute to Larry Harvey | #thankslarry?
Download the DJ set (.mp3 | .wav), enjoy it and share it with your friends!

This mix is just for fun and not for commercial use. Copyright for each tune is owned by their respective artists and/or publishers. For more info on copyright see this page.